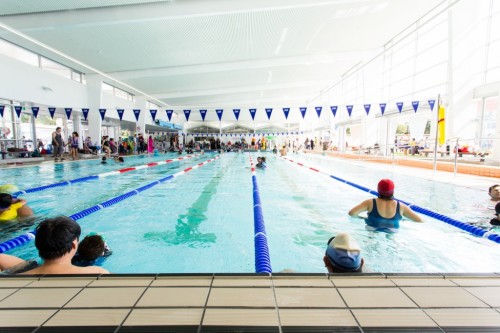 The recently reopened Ruth Everuss Aquatic Centre in the Sydney suburb of Auburn has installed privacy curtains so Muslim women can swim without being seen by other pool users.

With a large Muslim population in the Cumberland Council areas, the Parramatta Advertiser has reported that lightweight curtains have been uns around the glass walls of the program pool where female-only swimming sessions are held for two hours each Sunday.

Pool staff can draw the curtain to block the view into pool when the sessions are held.

Belgravia Leisure, which operates the refurbished council-run facility which was opened in March, says the curtain was installed to overcome cultural barriers and encourage Muslim women to use the pool.

Belgravia Leisure General Manager Anthony McIntosh said it was a move to make the pool accessible for all cultural groups.

McIntosh told the Parramatta Advertiser “there was a lot of research done prior to construction and we identified that they were user groups that we wanted to accommodate.

“Traditionally that core population group that would use the pool with the blinds closed would have to come after hours or at the earliest or latest possible times.

“Having the blinds means they can use it in the middle of the day and still have full access.”

While seem as a programming for specific demographics, similar facilities have attracted controversy at a number of other council pools across Australia.

However, the Anti-Discrimination Act does state that exemptions to the Act can be granted in order: “to provide people of a particular race with equal or improved access to facilities, services or opportunities to meet their special needs”.

Cumberland Council General Manager Malcolm Ryan supports the move, adding “there was a very high demand for female-only classes at the aquatic centre before redevelopment to cater for the differing modesty requirements.

“These classes were very popular but due to the centre only having one pool before redevelopment, the high demand wasn’t being met.

“With the installation of curtains at the program pool, the Auburn Ruth Everuss Aquatic Centre is inclusive to the whole community at all times and can cater to any requirement, without it impacting on the rest of the centre.”

The program pool is one of three pools at the complex and is used for rehabilitation or swim classes as well, with the curtain drawn only during prescribed women’s swimming times.

For more information go to www.auburnaquaticcentre.com.au