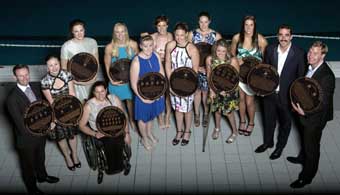 25 Australian Olympic Champions, World Champions and World Record Holders have been inducted into the Path of Champions at the Sydney Olympic Park Aquatic Centre (SOPAC).

The Path of Champions is displayed at the forecourts of the Aquatic and Athletic Centres.

Since its inception after the Sydney 2000 Olympic Games, the Path of Champions has honoured athletes such as Dawn Fraser, Ian Thorpe, Andrew 'Boy' Charlton, Shane Gould, Susie O'Neil and Murray Rose, to name but a few.

New athletes are inducted into the Path of Champions once every few years and this year – the 20th Anniversary since construction of the Sydney Olympic Park Aquatic and Athletic Centres – 2014 Path of Champions inductees included Paralympic swimmers and athletes.

The 25 newly-inducted athletes in the Path of Champions are:

For more information about the Path of Champions go to www.aquaticcentre.com.au/attractions/path_of_champions