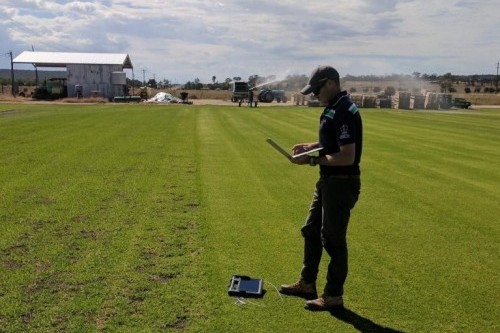 The expansion of the AusGAP initiative (the Australian Genetic Assured Purity Turf Accreditation Program) is to see industry groups like Australian Sports Turf Consultants offer not only the best turf products on the market through its certified growers, but to also offer advice and assistance in the planning, installation and maintenance of turf projects Australia wide.

A quality control system adopted by some of Australia’s premier turf grass producers, AusGAP covers business compliance in quality control, workplace health and safety, environmental stewardship and general business practices to ensure that customers receive the best in products and services from AusGAP certified turf producers across the country.

Now that the AusGAP program has reached a maturity that sees its original intake reaching full certification, the aim is to work with industry groups like Australian Sports Turf Consultants (ASTC).

program up to a standard that will resonate with specifiers and commercial clients.

Roche explains “I am looking forward to working with AusGAP and its national band of certified growers now and into the future.

“This initiative is a big step forward for the Australian turf industry and the clients that it services. Quality control is an integral part for the success of any project and with AusGAP, that quality of product and service is guaranteed.”

ASTC provides independent technical and agronomic advice to sports organisations, the turf production, environmental, commercial and residential sectors and is considered a leader in the Australian turf industry.

Dorney advises “we chose to work with ASTC because of the professionalism they show and the reputation that Mr. Roche has in the turf industry and the broader commercial world.”

Dorney added “since Mr. Roche has been involved with AusGAP, he has provided new procedures and templates for the on farm inspection of turf fields and business processes.”

The new format ensures that no stone is unturned when auditing compliance with the AusGAP protocols and the farmers are left with a clear outline of any shortcomings and given a timeline and suggested program for the rectifications, if there are any.

Dorney continued “Matt’s experience and input into the program has been invaluable. The system audit was undertaken to further improve the on-farm inspections through a third party expert, adding an extra element of professionalism and authority to the AusGAP certification, which Matt has certainly delivered.”

Roche has also been thoroughly impressed by the program and the significant steps AusGAP has taken in setting the standard for the Australian turf industry.

He concluded “it is great to finally see a national quality control program in the Australian turf industry that is so thorough and transparent.

“ASTC has been working with AusGAP since mid-2017, in that time we have been able to come up with a program that built on the strengths of the original ITGAP1 protocols, give the growers clear direction and focus on overall business excellence while also offering the consumer the peace of mind that they are purchasing the best turf products on the market.”

With the AusGAP program having been active since 2015, businesses that took the early initiative to join up and work through the vast compliance measures now have a clear market advantage over non-certified competitors.