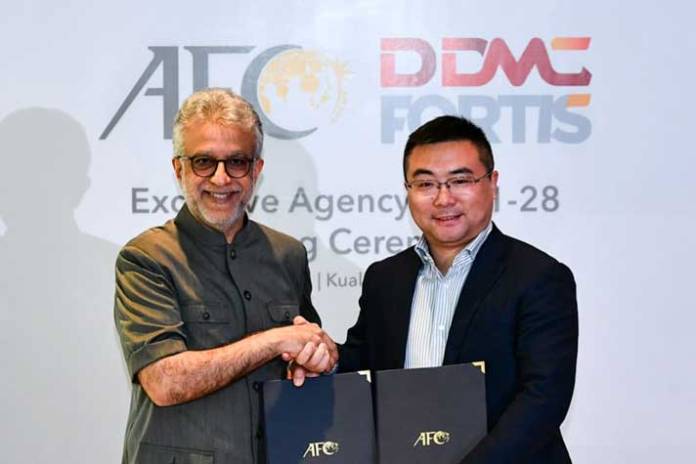 The Asian Football Confederation (AFC) has announced a new commercial rights agreement between with sports marketing agency DDMC Fortis that it describes as the “most significant day” in its history.

Under the eight-year deal, DDMC Fortis will have exclusive rights to market all AFC sponsorship and media assets from 2021 until 2028, beginning from the final qualifying round of the 2022 FIFA World Cup.

Advising that the $3.4 billion partnership will secure the financial future of the sport in Asia for a decade, AFC President Sheikh Salman bin Ebrahim Al Khalifa stated “this is a most significant day in the history of the AFC.

“With the signing of this contract, the AFC can guarantee its member associations that the game in Asia has tremendously solid financial foundations from which to build.”

Dr. Yi Rentao, Chairman of DDMC Fortis and Wuhan DDMC Culture Co. Ltd added “we are extremely proud to sign this contract and enter into this significant partnership becoming the first Chinese enterprise to have secured such a comprehensive commercial mandate for a prestigious global football property.

“DDMC Fortis was created specifically for the purpose of delivering this prestigious mandate for the AFC. We built the company by combining DDMC, a leading Chinese Sports, Media and Entertainment company, with Fortis Sports, an expert sports marketing agency founded by Patrick Murphy and David Tyler.

“By combining the global market expertise of the two companies we are in the position to take Asian football to the next level and kick-off a golden decade of growth.”

DDMC Fortis have also committed to work with the AFC in developing new competitions and events with a focus on enhancing competition brands with particular emphasis on engaging young audiences across the region. They will also develop and implement the next phase of the AFC’s fan focused marketing and digital strategy from 2021 onwards.

DDMC Fortis Chief Executive Patrick Murphy “we are incredibly enthusiastic about the length of the partnership as we strongly feel that, in cooperation with the AFC, we are in a position to transform the way Asian football is organised, enjoyed and commercialised across Asia.”

The new deal follows a long-standing commercial partnership between the AFC and Lagardère Sports and Entertainment.