Asian first as HKCEC’s Wallace joins the ‘Hall of Leaders’ 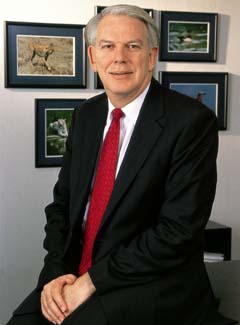 Cliff Wallace, Managing Director of Hong Kong Convention and Exhibition Centre (Management) Limited (HML), has been inducted into the '2011 Hall of Leaders' by the Convention Industry Council (CIC).

The 'Hall of Leaders' award is the premier recognition program in the convention and exhibition industry, and Wallace is the first leader in Asia to have received this honour.

The CIC has been honouring outstanding leaders and innovators of the convention and exhibition industry with its Hall of Leaders awards since 1985. Its detailed and rigorous selection criteria have meant that only 102 leaders have been inducted into the CIC Hall of Leaders since the awards began, with only four achieving the honour this year. Besides recognising Wallace's personal achievements and his outstanding contributions to the industry, the award also further enhances the international status of Asia, and especially Hong Kong, within the global exhibition and convention industry.

At the presentation, held at the Baltimore Convention Centre, USA, a delighted Wallace told the audience "I am truly touched to have been selected by the CIC from among the many thousands who work the long hours and tolerate the high levels of stress which we so often face in our industry. More than ever today, we need leaders and good leadership throughout the world - not just to handle crises, but to provide guidance under normal circumstances. Let us strive to be visionaries and encourage learning, so that the services we offer as an industry personify confidence and competence.

"I would like to express my heartfelt thanks to my wife and three daughters, who have been hugely supportive and also enormously tolerant of the level of time and attention that I have devoted to this industry. My thanks go out also to my many friends and peers in the industry, to my extraordinary HML staff, and to our holding company NWS Holdings in Hong Kong."

Fred Lam, Executive Director of Hong Kong Trade Development Council (HKTDC), the statutory organisation responsible for overseeing the operation and service standards of the HKCEC, congratulated Cliff, stating "Mr Wallace has made significant contributions in enhancing the status of Hong Kong''s convention and exhibition industry over the years. It is fitting that he is Asia's first inductee into the Hall of Leaders. This honour also underscores Hong Kong's position as the region's convention and exhibition capital."

Cliff Wallace has served HML as Managing Director since 1995. He leads around 1,000 professional team members, responsible for providing day to day management for the HKCEC and overseeing administration, marketing, booking, scheduling, event co-ordination, maintenance and security. His team also handles food and beverage operations at the HKCEC.

Over the years the HML team has won numerous industry awards for the HKCEC, including helping the HKCEC be named 'Asia's Best Convention and Exhibition Centre' eight times between 2000 and 2011.

Wallace is also the Chairman of Hong Kong - Shanghai Venue Management (Zhengzhou) Ltd. and Shenyang New World Expo (Management) Ltd, Mainland China companies responsible for the management and operation of the Zhengzhou International Exhibition and Convention Centre in Henan Province and Shenyang New World Expo in Liaoning. In this capacity he has been involved in grooming young talent in Mainland China in preparation for their taking up senior executive roles in the field of venue management in the future. He was presented the Yellow River Friendship Award by the Henan Provincial People's Government in September 2008.

The Convention Liaison Council was founded in 1949 by four organisations to facilitate the exchange of information within the meetings, conventions, and exhibitions industry. Now the Convention Industry Council has grown to include 31 member organisations.

For more information go to www.conventionindustry.org

8th July 2010 - Chinese Baseball League to be launched in August