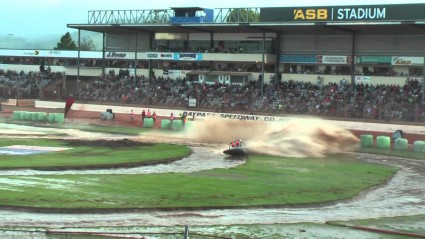 The ASB Baypark stadium at Mt Maunganui was recently transformed into an aquatic sports venue for the second round of the National Jetsprint Series.

More used to hosting speedway racing and rugby union, the Tauranga venue became a jetsprint track with a network of water-filled channels at the end of January.

Nearly 200 truckloads of dirt were shifted from the ASB Baypark infield to allow the creation of what was the first ever jetsprint track inside a stadium.

Driver Paul Gaston explained "this hasn't been seen in a stadium like this before, so it's a world first."

Creating the temporary track was no easy task; it involved digging out 1,500 cubic metres of dirt from the infield. 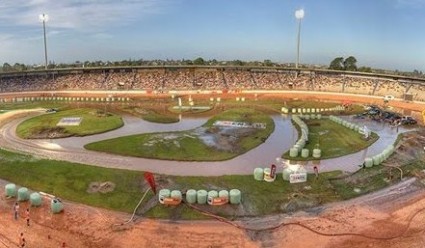 ASB Baypark General Manager Ervin McSweeney added "it only took three days (to create the track) because we didn't have to move (the dirt) very far."

Over 15,000 attended the event, with the stadium then having to be reconfigured to host speedway just a week later.

The six round series continues on to its final round in Wanaka on 18th April.

For more information go to www.jetsprint.co.nz/