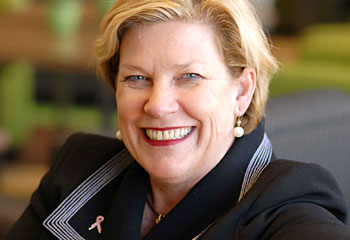 Sherry's appointment follows last week's announcement of a partnership between Australian Rugby Union and UN Women Australia to promote the role of women in leadership and sport.

Welcoming the appointment, UN Women Australia Executive Director Julie McKay stated "the appointment of the first female Board Director by Australian Rugby Union is a positive step in ensuring that women across the sport are represented and recognised.

"Ms Sherry has been a strong advocate on issues affecting women for many years and brings to the role extensive experience representing Australia at United Nation's forums on gender and human rights and working in the women's policy sector.

"Ann is a well-respected businesswoman who has had an enormously successful career. We look forward to working with Ann and Australian Rugby Union to further the aims of our partnership together."

The lunch will celebrate the contribution women make in our society and raise money for the Boys in Rugby Against Violence Everywhere (BRAVE) initiative, supported by UN Women in the Pacific.

Ann Sherry's appointment to the ARU board was also welcomed by Federal Minister for Sport Kate Lundy.

Senator Lundy said Sherry would be a wonderful addition to the board and her expertise would assist the ARU with the governance review underway.

Senator Lundy explained "Ann is one of Australia's most well regarding business executives and has been a wonderful ambassador for women and a champion for social justice and inclusion.

"With the introduction of women's and men's rugby sevens to the Olympics in 2016 I have no doubt that the women's sevens team will have a role model and an advocate on the board."

Sherry has tendered her resignation from the Australian Sports Commission board (of which she has been a member since July 2010) in order to avoid any possible conflict of interest.

Tickets for the UN Women Australia Rugby Lunch can be booked at https://bcfestival.floktu.com/tickets