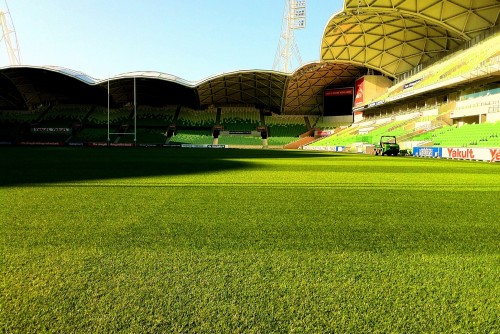 Furious about the performance of the playing surface at Melbourne’s AAMI Park during last night’s second rugby Test between the Wallabies and England, the Australian Rugby Union (ARU) has threatened to booked ​​ ​take future games elsewhere.

Despite assurances from ground staff in the lead-up to the Test match, turf repeatedly gave way during scrums. The scrums left the turf ripped up across the ground, with the holes a danger for all players.

ARU Chief Executive Bill Pulver said he was “embarrassed” by the state of playing surface, stating “to be perfectly honest I was embarrassed. It is supposed to be a world class stadium and the surface was simply unsatisfactory.

“We had been given an undertaking it would be very different to how it played earlier in the season and it simply wasn’t. I am extremely disappointed with the outcome.”

The ARU moved from Etihad Stadium to the smaller AAMI Park for better atmosphere, but there is no guarantee the ARU will return.

Pulver added “while we haven’t yet announced the fixture, we have an agreement with the venue and VMEC to play a Test match at AAMI Park in 2017.

“The venue is obligated to provide a playing surface which is safe for the playing of international Rugby and clearly this was not delivered upon last night.

“Prior to making any decision about 2017, the stadium must put specific measures in place, including an independent turf expert providing regular reports back to the ARU.”

Pulver repeated his call for AAMI Park and others to invest in hybrid turf technology to ensure the scenes of Saturday night are not repeated.

“AAMI Park must investigate all technology available to improve the surface. If we don’t have satisfactory progress in the coming months, we’ll need to revisit our agreement with them for 2017.” Turf problems at AAMI Park are nothing new, with scrums during Melbourne Rebels Super Rugby home games suffering problems.

AAMI Park blamed heavy traffic and unfriendly weather for those issues, but with Super Rugby on a four-week break and no A-League football played on the ground they were confident the root systems would be repaired.