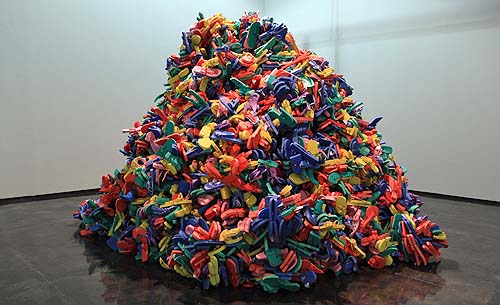 Federal Arts Minister George Brandis has defended moves to block funding for arts organisations that refuse corporate sponsorship following what he called the "preposterously unreasonable" termination of Transfield's sponsorship of the Sydney Biennale.

Minister Brandis has even suggested that arts companies and festivals might be penalised for refusing tobacco company funding under a new policy for corporate sponsorship that he has asked the Australia Council to create.

The Guardian Australia has reported that Minister Brandis has asked the Australia Council, which distributed commonwealth arts funding, to develop the policy after Biennale Sydney parted ways with Transfield Holdings and its Chairman, Luca Belgiorno-Nettis, after artists objected to the company's links to Transfield Services, a contractor at Australia's Manus Island detention centre.

Minister Brandis has called the decision, which Transfield Holdings said was mutual, "preposterously unreasonable" but could not rule out penalties applying to arts festivals and companies which refused funding from tobacco companies.

If the policy Australia Council develops does not satisfy Brandis he has already said he will force the council to adopt one up to his standards.

He said the definition of unreasonable was up to the Australia Council and it might appoint an arbiter which could be the Council itself, the minister or another third party.

When asked what would be reasonable grounds to refuse private funding Brandis replied "we're talking hypothetical but let us say for instance an arts company or arts festival is approached by a prospective private partner and the arts company or festival had concerns about whether the prospective private partner had the financial substance to give the money that it was promising."

The Australia Council Act 2013 expressly forbids a minister from intervening on funding distribution in specific cases but Minister Brandis has argued he is using the provision which allows the arts minister to direct function and policies of the Council.

Senator Brandis said it was "fine for artists to make political statements" but felt the views expressed on this occasion were "irrational" and the Biennale board had capitulated "to the blackmail effectively of a small number of artists."

He defended his decision to write to the Australia Council and said he was "merely asking them to develop a policy to deal with circumstances such as this".

Sydney Biennale is yet to comment on the request Brandis has made for a change of policy.

There are differing opinions in the arts community on the actions of Sydney Biennale and the new policy being proposed by Brandis.

Brandis told The Guardian "as an artist I find it very disappointing that a small number of artists would jeopardise the livelihood of many others and undermine the future of an event that's meant so much to so many over the years.

"The Minister is expressing the views that many in the arts community have already expressed privately."

Brink Productions Artistic Director Chris Drummond, said the Biennale had a unique set of circumstances and Brandis was not responding correctly to a nuanced and comple