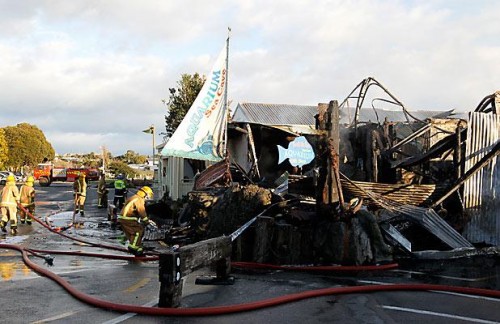 The fire that destroyed the much-loved aquarium on Mapua wharf last week has been confirmed as being the result of arson.

A red-eared turtle was the only one of more than 200 creatures at the Touch the Sea Aquarium to survive the inferno, which is now expected to be demolished.

One of the Tasman Bay region's major family attractions, Aquarium owner Murray Goss described the fire as "the end of an era."

Goss told the Nelson Mail "it's not the physical loss, it's all the emotional side. I'm thinking of all the school children and people who won't be able to come to the aquarium any more and the effect it will have on Mapua.

"The fact that my twin grandchildren have turned one year old and won't be able to see it."

Although insured, Goss doesn't know what the future of his business, which attracted 25,000 visitors a year, will be.

The blaze also destroyed a gift shop and the offices of an urban-design business. Detective John Nicholls, of Motueka, said investigations into the fire were continuing.