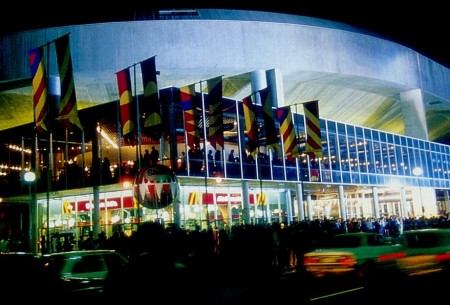 Arena Management Pty Ltd, operator of the Sydney Entertainment Centre (SEC), has gone into receivership after sustained losses caused by the economic downturn.

A statement from the company has explained that a secured creditor who is owed $1.7 million has called in Andrew Wily and David Hurst of Armstrong Wily Chartered Accountants as receivers and managers of the company.

The unnamed creditor holds a charge over Arena Management's assets as security for the loan.

Arena Management Chairman Kevin Jacobsen said the company lost money due to the economic downturn and due to its failure to sell or assign the SEC lease.

He also blamed the venue's owner for a lack of flexibility in adjusting lease terms to reflect the downturn.

In the company statement Jacobsen explained "ultimately this is a loss for the Sydney public.

"The SEC is the beating heart of live entertainment and culture in Sydney, presenting a greater variety of large-scale concerts and events than any other venue."

"The venue's staff and management are highly regarded.

"It's a real pity the venues owner could not find a way clear to adjust the Lease conditions to reflect the sharp and unexpected market downturn."

Jacobsen added that Arena recently paid for a $4.5 million refurbishment, so the venue is in pristine condition.

The SEC will continue to trade while Armstrong Wily are in control.

Earlier this year AEG Ogden had investigated the acquisition of the lease for the Sydney Entertainment Centre from Arena Management. However, at the beginning of July AEG Ogden decided not to proceed with the acquisition, Chief Executive Harvey Lister explaining that during the due diligence process, accountants acting on behalf of AEG Ogden identified a range of issues which caused concern, advising "a number of these issues were raised directly with the Board of Arena Management but to date we have not received a satisfactory explanation in regards to the issues of concern, nor have we received the additional information our accountants requested to enable them to complete their due diligence investigations."