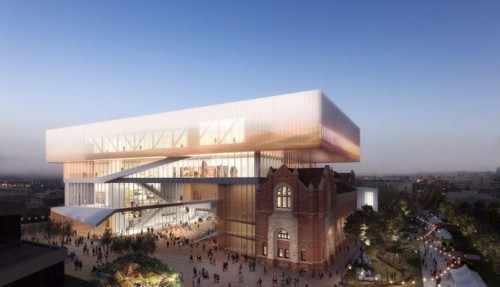 The design by the two international design practices combines a mix of heritage and contemporary architecture, with a modern roof and new buildings intersected by refurbished heritage buildings on the museum campus. The building, which will house the state’s scientific and cultural collections, will be formed of a 23,000 metre²  extension to its current home - quadrupling its size.

A large new temporary exhibition space is incorporated into the new design, while the museum will also host a number of retail and dining experiences, which its management team hopes will increase after-hours visitor numbers. Concept images for the project also reveal large public space that the designers described as an "outdoor room" which is “the central point of the new museum, in terms of both location and programming”.

In a joint statement, Hassell principal Mark Loughnan and OMA managing partner-architect David Gianotten advised “our vision for the design was to create spaces that promote engagement and collaboration, responding to the needs of the museum and the community.

“We want it to create a civic place for everyone, an interesting mix of heritage and contemporary architecture that helps revitalise the Perth Cultural Centre while celebrating the culture of Western Australia on the world stage. The design is based on the intersection of a horizontal and vertical loop creating large possibilities of curatorial strategies for both temporary and fixed exhibitions.”

The design team overcame competition from firms including Foster + Partners and Ateliers Jean Nouvel to win the commission for the project.

The new museum will be built by contractor Brookfield Multiplex.

Early works are expected to start in late 2016 with main construction starting in 2017. The New Museum is due to be completed in 2020.