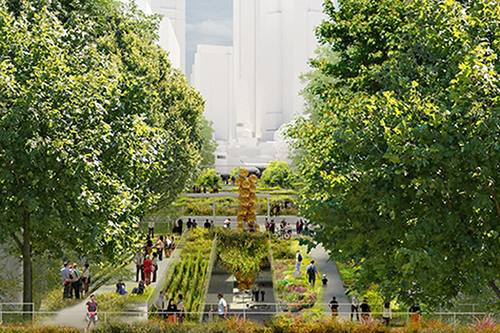 Melbourne design practice HASSELL, in partnership with New York’s SO-IL, will lead a local and international team to design the new public space that will form part of the Melbourne Arts Precinct redevelopment.

The Melbourne Arts Precinct transformation project will include an elevated inner-city park and new pedestrian connections into and throughout the area, enabling visitors to move seamlessly from Southbank and the Yarra, through Melbourne’s famed St Kilda Road cultural institutions.

The project will deliver 18,000 metres2 of new and renewed open public space in what is one of Australia’s most densely populated suburbs.

Introducing the design, Project Directors Ben Duckworth (HASSELL) and Jing Liu (SO–IL) stated "this is a rare opportunity to help shape how Melburnians and millions of visitors from across the globe experience the cultural offering within the Melbourne Arts Precinct, and enable them to connect with nature as they experience this part of the city on a day-to-day basis."

HASSELL is an award-winning design practice with extensive experience in public space design, from Darwin’s waterfront to Sydney Olympic Park. The team is currently working on the Melbourne Metro Tunnel project, as well as major new public spaces in Shanghai and Shenzhen.

Based in Brooklyn, SO-IL (Solid Objects Idenburg Liu) has previously worked with New York’s MoMA and Frieze Art Fair. SO-IL is currently creating a new waterfront in Paris. The architects will lead a rigorous, collaborative design process to make sure that this massive new public space is the beating heart of Melbourne as a cultural capital.

The winning bid puts a strong focus on nature and will include seasonal gardens by world-renowned horticulturalists Nigel Dunnett and James Hitchmough, who transformed London’s Barbican Centre. 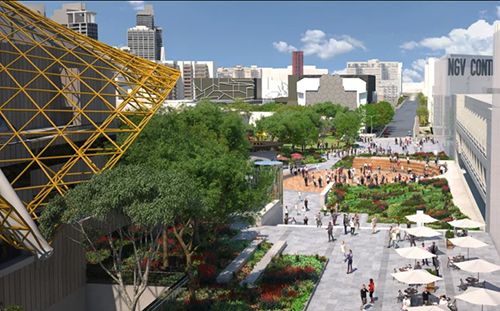 Victoria Minister for Creative Industries Martin Foley stated "the new public open space will draw people into the heart of the rejuvenated Sturt Street Arts precinct which continues to grow as the home to over 40 different arts and cultural organisations and performance spaces."

The Victorian Government has invested $208 million over two years in the first phase of the project, to kick-start planning and enable the NGV and Arts Centre Melbourne to begin raising philanthropic funds for the revitalisation.

Once complete, it is expected to draw an additional three million people to the area each year.