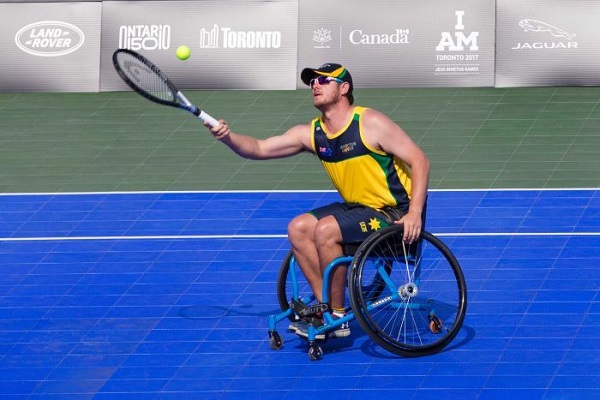 Finished last October, the Centre’s main court has a 49-centimetre slope across it from one side to the other. The angle was discovered in November but has yet to be rectified.

Tennis NT Chief Executive Sam Gibson said this 2% gradient was found to be twice the acceptable level permitted by the ITF for wheelchair competitions.

As a result, wheelchair tennis players from around the world will have to play on 14 outside courts, while the non-disabled competition, which is not internationally sanctioned, will continue on the covered main arena.

Gibson explained “unfortunately, the ITF wheelchair component of the Arafura Games won't be able to use the show court because the court doesn't comply with the ITF recommendations.

"So that means that the wheelchair component will be played on the other courts."

While pronouncing the court a "fantastic new facility", Northern Territory Arafura Games Minister Natasha Fyles said the fact it could not be used by wheelchair tennis players was "concerning".

Gibson said project managers were working on the problem but that work to rectify it will not begin until October at the earliest.

He did not say how much it was expected to cost, but added “we've made it clear that we don't expect the Territory Government or taxpayers to contribute any more funding to this facility and that will just be a matter for the project team to figure that out.”

The Arafura Games will run in Darwin from 26th April to 4th May, with more than 1,500 athletes and team officials from more than 30 nations expected.

The para events will run in conjunction with the main schedule.

In some disciplines, such as table tennis, para athletes will use the Arafura Games for qualification ahead of the 2020 Paralympics in Tokyo.

The wheelchair tennis competition will give junior players the chance to earn rankings points in an ITF-sanctioned event.