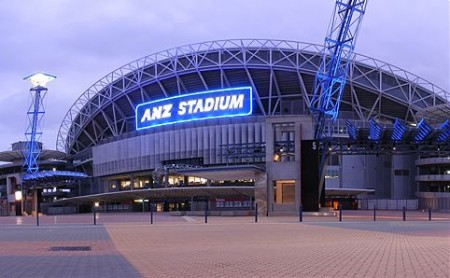 Behind the scenes of the NRL Grand Final on Sunday 4th October, ANZ Stadium is preparing for the event at its food and beverage outlets, with its technology and with a temporary stage.

ANZ Stadium Head Chef, John Deane is behind the feeding the crowd of 80,000-plus that will fill the stands to watch the historic all-Queensland NRL Grand Final featuring the Brisbane Broncos and the North Queensland Cowboys.

Around 8,000 corporate guests will dine in five-star style on Grand Final day while the venue is preparing to serve to serve 15,000 meat pies, 18,000 buckets of chips and 120,000 cups of beer to regular patrons.

On the field, a temporary stage is being built for the pre-game entertainment, with rock legends Cold Chisel ready to rock the capacity Stadium.

As many as 30,000 Queenslanders are heading to Sydney for the Grand Final, and ANZ Stadium has set up designated outdoor team bars for the rival supporter groups at either end of the Stadium.

The Cowboys’ supporters group, the North Queensland Cowboys Stampede, will be in the northern stands and the Broncos Stable will be in the south, with team bars directly behind the supporters’ areas.

The venue will also be delivering the ‘next generation’ in fan experiences at the Telstra Connected Lounge.

Debuted during the 2014 NRL finals series, the Telstra Connected Lounge is an interactive technology centre where fans can immerse themselves in the latest technology and enjoy a new type of live game experience.

Bespoke video content, accessible via the ANZ Stadium App over the Stadium’s Wi-Fi, offers fan emotion pieces captured outside the ground, as well as special features and interviews filmed from inside the Connected Lounge.