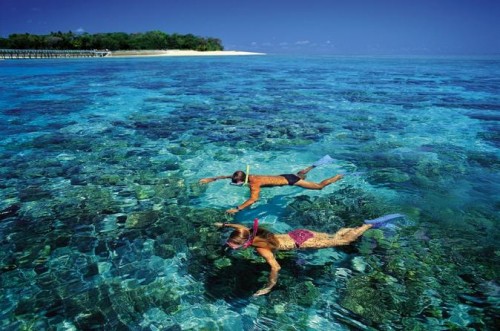 A British tourist has died on a diving trip about 40 kilometres off the Cairns coastline, the fifth fatality on the Great Barrier Reef in three months.

The man, in his 60s, was pulled from the waters of Moore Reef around midday on Wednesday.

As with other fatalities, local media were quick to attribute the death to heart attack.

A rescue helicopter was on its way to get the man but then was diverted to Green Island to help a 43-year-old woman who almost drowned while snorkelling and is now fighting for her life.

CPR was performed on the man but he couldn’t be revived and Queensland Police will now prepare a report for the coroner.

According to the ABC, 10 people died on the reef last year and the majority of the victims were elderly and had pre-existing medical conditions.

Association of Marine Park Tourism Operators spokesman Col McKenzie told the ABC that 10 fatalities in one year was double the industry average and conceded that regulations may need to be tweaked.

However, tour operators and media ignored mentioning that the deaths could have been caused by stings from the tiny but deadly been irukandji jellyfish, presumably over fears that it would damage the Queensland tourism industry

In addition to the deaths of the tourists in recent months, a coronial inquest has this week opened in Cairns into event surrounding the events of an experienced swimmer’s death in April last year.

Leila Trott disappeared in choppy waves on the Great Barrier Reef but it took 40 minutes for her colleague to officially raise the alarm, the Cairns Coroner’s Court has heard.

Her parents Janet and Robert Trott fear the true cause of their daughter’s death may have been covered up to protect tourism on the reef.

A coronial inquest into her death heard on Wednesday that her colleague Filippo Matucci lost sight of Trott after taking a “two-minute toilet break”.

Matucci, initially called his manager and took part in a search with about five nearby vessels.

But the official call that would have alerted Water Police and the retrieval helicopter in Cairns was not made until 2.06pm, about 40 minutes after Trott was first noticed missing.

Her lifeless body was found floating face down in the water at 2.18pm.

Image: Snorkelling on the Great Barrier Reef. Image used for illustrative purposes only.