After 50 years of operations, the Dubai Zoo is today permanently closing its doors – with its animal exhibits now to be relocated to the new Dubai Safari, scheduled to open at the beginning of next month.

As the Zoo closed its gates at 5:30pm, Dr Reza Khan, principal wildlife specialist for the Dubai Municipality - who served at the Zoo for the past 25 years - said it's the end of an era, not only for Dubai but also for the Arabian Peninsula.

Dr Khan told the Khaleej Times "the Dubai Zoo is the oldest zoo in the Arabian Peninsula and this is considered the end of a chapter.

"It is the end of a long journey of education and conversation that brought people closer to animals. Nostalgia fills us, but we are happy that animals will be getting extra space and care at the Dubai Safari.”

Open for free over the weekend, the Zoo, which first opened in May 1967, has been home to more than 230 different species of animals.

Its management was taken over by the Dubai Municipality in 1971.

Its replacement by the Dubai Safari was first proposed in 2003 and, after a range of different schemes, the new attraction will e located in Dubai’s Al Warqaa district across 120 hectares of land – compared to the Dubai Zoo’s 1.5 hectare site.

To combat high temperatures for its inhabitants, Dubai Safari will use a number of innovative technologies to accommodate the animals in the arid desert climate, including rocks fitted with air conditioning to keep temperatures down.

Financed by the Dubai Municipality, the AED1 billion (US$272 million) project by design and construction firm Cape Reed will include the zoo and safari, as well as a butterfly park, botanical garden, hotel and golf course, in addition to educational, conservation and veterinary facilities.

While some 500 animals have already been moved to the Dubai Safari, 200 others, including a lion, bear, monkeys, birds, snakes, baby tortoises, chimpanzees and a gibbon, will make their migration in the coming weeks. 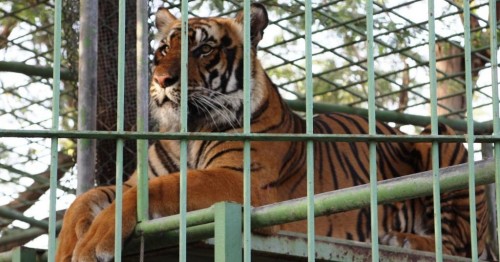 He explained “the safari is divided into Arabian, Asian and African villages. Some of the animals we have do not fit in any of the sections, so they will be exhibited in a different place.

"Small birds, for example, will be exhibited in a children's park for educational purposes."

He added that animals that won't be exhibited will be placed in quarantine where they would have space to live. Nursing mothers will be given special care in "holding areas".

While the two-hectare zoo won't be open for visitors, work is still not done for Dr Khan and his staff who have to ensure a safe transition of animals to the bigger park, expected to open on the United Arab Emirates’ National Day on 2nd December.

Commenting on the heritage of the Dubai Zoo, Khaled Al Suwaidi, Director of Leisure Facilities Department at Dubai Municipality, concluded "Dubai Zoo has been a testimony to the leadership's commitment and keenness all these years to be ahead in wildlife conservation and providing entertainment services to the local community.

"We'd like to thank all the employees of the zoo for their valuable efforts in the past years. We wish all of them the very best in the new project and we look forward to benefit from their expertise in the service of Dubai Safari.”

Images: The Dubai Zoo sign (top) and cramped conditions for animals at Dubai Zoo will be replaced by more open areas at the new Dubai Safari (below).