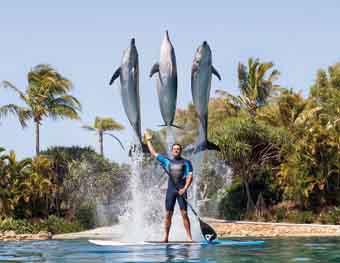 A visit by UK popstar Sam Smith to Sea World has ignited criticism over the Gold Coast theme park's keeping of dolphins and other marine creatures.

Smith was widely critised by fans and animal rights activists for his visit, with comments, reported on the BBC, suggesting that Sea World's keeping of dolphins and other marine mammals was "cruel".

Criticism would appear to be inspired by the 2013 Blackfish documentary which focussed on a killer whale held at SeaWorld Orlando, USA and the subsequent controversy over killer whales being held in captivity.

Smith responded that Australia's Sea World was "very different" to the Florida park with which it shares its name, the Australian park being operated by Village Roadshow Theme Parks (VRTP).

However, Australian-based campaign Sea World Shutdown subsequently issued the following comment "we're speaking up for the captive performing dolphins at Sea World Gold Coast with the help of international and local celebrities but we also need your help, and voice.

"Aussie dolphins have been stolen from the ocean and some bred in captivity but all are forced to perfom daily at Sea World on the Gold Coast."

Sea World Shutdown founder June Bird Killington added "the whole world is up in arms about Sea World and other aquaprisons.

"It's time that Australians opened their eyes and became educated to the cruelty of trapping and keeping captive dolphins".

"We love them (Sea World) rescuing cetaceans but we loathe them keeping dolphins as captives in their aquaprison.

"The dolphins need to be rehabilitated and freed or taken to a safe sanctuary/bay/cove paid for by Sea World to live out their lives without human interference."

Animal rights charity People for the Ethical Treatment of Animals (PETA)'s 'SeaWorld of hurt' campaign claims that Sea World Orlando's business is "built on the suffering of intelligent, social animals who are denied everything that is natural and important to them."

In 2012, PETA Australia Campaign Manager Ashley Fruno told the Sydney Morning Herald that Sea World on the Gold Coast has dolphins and other animals "imprisoned".

VRTP refer interested parties to a page on Sea World's website - 'Our Position' on marine mammals, highlighting their record in marine conservation going back over more than four decades and their "strong reputation for caring for marine animals."

In relation to its dolphins, Sea World's website highlights "Sea World is very proud of its world class exhibits for dolphins including some of the largest filtered natural sandy bottom lagoon systems in the world. We have a strong reputation for caring for marine animals, along with an exemplary record of animal care, research and rescue accomplishments.

"On average Bottlenose Dolphins can live to 23 - 30 years of age in the wild dependent on their environmental threats, but at Sea World we have had some Dolphins live to be beyond 50 years of age. This long life can be attributed to excellent husbandry, veterinary care, world class facilities and a lack predators, all leading to longevity. The health and wellbeing of our animals is of the upmost priority. Sea World has rescued, rehabilitated and released many marine creatures over its years of operation through the park’s not for profit research and rescue foundation.

"The majority of our dolphins have been born at Sea World as part of our managed breeding program which has been in place for many years. Some animals are third generation and others were transferred to Sea World many years ago when other facilities in Australia and New Guinea closed.

"The Australian Government does not permit the import or export of cetaceans except for special circumstances and under a strict conservation plan. The take or interference of wild dolphins is strictly illegal in Australian waters."

Sea World opened a new dolphin show in the weeks before last Christmas.

25th April 2014 - CONSULTATION ON A NATIONAL STANDARD FOR EXHIBITED ANIMALS