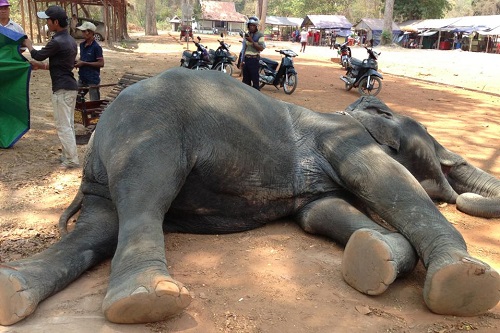 Outrage over elephant riding has erupted again, with a petition to end the practice gaining hundreds of thousands of signatures following the death of an elderly elephant trained to carry tourists.

Sambo the elephant, aged between 40 and 45, died after walking for 40 minutes between two temples in the ancient archaeological complex of Angkor Wat in Cambodia in 40C heat.

The elephant was carrying just two tourists, one at a time, but the heat proved too much. A vet established that Sambo “died of a heart attack due to high temperatures and lack of wind”, according to the Phnom Penh Post.

Earlier this year, the issue surfaced after an elephant handler struck his animal on the head several times – before the animal went berserk, attacked a tourist and trampled a tour guide who tried to intervene.

Campaigners in Cambodia say Sambo's death should be the catalyst to lead to the banning of elephant tourism.

"The death (of Sambo) should be the final wake-up call for the community and tourism industry to take the steps needed to end this horrific practice.

"There is no such thing as cruelty-free elephant rides. Tourists may think that riding an elephant on holiday does not cause harm … what you don't realise is that a 'once in a lifetime' or 'bucket list' item for you means a lifetime of misery for wild animals." 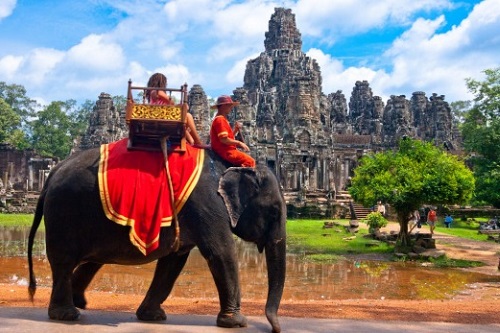 Elephant riding remains highly controversial, with animal welfare groups working to ban it. Intrepid Travel officially put a stop to elephant riding on its trips five years ago and other operators have done likewise. TripAdvisor has banned ticket sales for any tours involving elephant riding and Thomas Cook stopped promoting elephant rides and shows after over hundreds of thousands people signed a petition.

A Facebook post by a passer-by, Yem Senok, showing images of the dead elephant has been shared more than 8000 times.

Images: Sambo lies dead after suffering a heart attack in in 40C heat as posted on Facebook by Yem Senok (top) and elephant rides as offered at Cambodia's Angkor Wat. (below).

Editor's note: There is some uncertainty as to whether this incident occurred recently or in 2016.