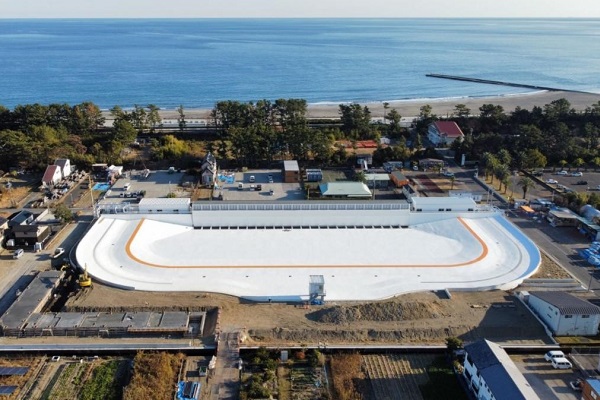 Located in the beach and surf town of Shizunami, 250 kilometres south west of the nation’s capital of Tokyo, American Wave Machines (AWM) has advised that the PerfectSwell pool “has been constructed in record time” despite the disruptive business conditions that have affected world travel and challenges to productivity. In cooperation, Surf Stadium Japan (SSJ), the licensee, and AWM overcame supply chain and logistics challenges to deliver the thousands of components required with civil works completed in 389 days.

Now, AWM will deliver “never-before-seen innovations” during the all-important commissioning phase of the attraction, including ‘temporal distortion’, a newly invented wave design feature allowing for new dimensions of hydrodynamic control.

Introducing the technology, AWM Surf Programmer, William McFarland explained “temporal Distortion will lead to an entirely new selection of waves for both high-performance and learning applications.” 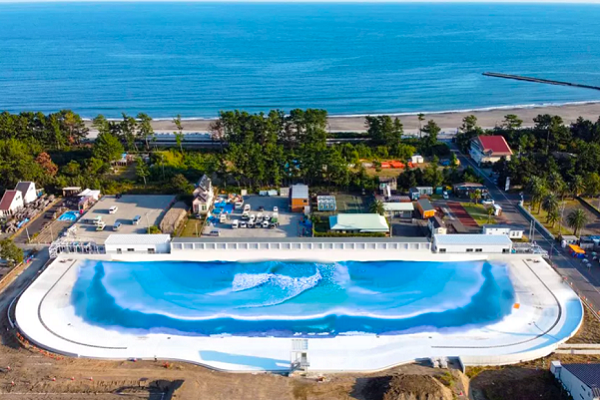 The California, USA-based company also feel that PerfectSwell® Shizunami will also demonstrate how high-performance surf can be achieved in urban, surf-centric, relatively smaller footprint locations, referred to as ‘surf arenas’. Advising that this scalability further demonstrates how PerfectSwell® Surf Technology can be deployed globally in varied applications, AWM Senior Vice President, Mike Lopez stated “by fitting the dynamic, powerful, and varied surf PerfectSwell® provides onto a footprint less than half the size of anything similar, we’ve created a blueprint for a stand-alone urban surf park that is ready to roll out across the world.”

With surfing making its Olympic debut at this year’s Tokyo Games, interest in the sport is expected to grow in Japan while Shizunami already supports a local surf industry with local surf shops, including Jack Ocean Sports, serving a large population of local and travelling surfers.

An opening date will be announced after the travel ban from USA to Japan is lifted and PerfectSwell® Shizunami is commissioned by AWM for the licensee (SSJ) to begin public operations.

Images: Aerial view of PerfectSwell® Shizunami under final construction (top) and how the facility will look when operational (below). Credit: Surf Stadium Japan.