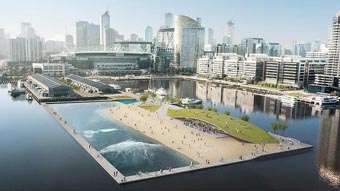 Details of an ambitious plan to build a floating aquatic leisure attraction in the Melbourne Docklands have been revealed to media.

Planned to be moored to the end of Docklands' Central Pier, the facility would include an artificial surf wave pool, a lagoon with a sandy beach entry, a deck, lawn area, retail space and amenities including food and beverage outlets.

The wave pool would produce waves of up to 1.5 metres, be heated all year round and use filtered salt water from the harbour.

Engineering firm Arup is leading the proposal after being approached with the idea by Melbourne architect Damian Rogers.

Rogers, a keen surfer, started working on the concept five months ago and said it would be a great attraction for the city.

Rogers told media "just to be able to hear the waves breaking and go for a surf - even if you're not a surfer, to be able to sit there and watch it.

"The wave can be died down for multiple different user groups.

"It would just be a great place to be. Yet another great place for people in Melbourne to go."

While details of the wave technology to be used have not been revealed, references to an artificial wave projects in Wales suggest that the Wave Park Group's Wavegarden wave generation technology is being considered.

Commenting on the project, Arup urban and transport planner Phil Carter suggested that the facility would be expected to cost more than $8 million. He did not reveal the extent of backing for the proposal but did explains that funding from developers and potential operators of the facility was being sought.

Melbourne City Council and Places Victoria have already met with the proponent with a Council statement saying it was "an interesting concept, if private funding were available for the infrastructure."

The statement added "the City of Melbourne has not committed any support for this project and has only been approached informally to be advised of this private sector initiative."

Surfing Victoria is backing the project with Chief Executive Max Wells saying it would suit surfers of all abilities.

Wells stated "the concepts that I've been shown show that they can dial the wave up head height which is something that an advanced or intermediate surfer can surf.

Wells added that during the past decade he had been presented with various "ambitious" plans for wave pools.

However, he added that this was the first time he has been convinced it could work, stating "the reason for that is they've got the right location and the indication that it will be available to them."