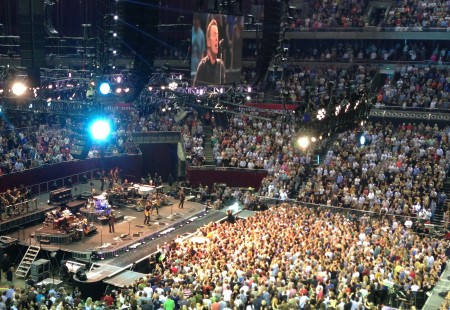 Foodbank New South Wales have confirmed that thanks to Bruce Springsteen, Frontier Touring and Allphones Arena they raised $37,000 during the Wrecking Ball Tour's three Sydney concerts at the venue on 18th, 20th and 22nd March, 2013.

Bruce Springsteen became Foodbank's newest friend during his time in Sydney providing the organisation with two VIP tickets for each of his shows at Allphones Arena to auction with all proceeds going to Foodbank NSW to help feed Australians in need. These seats were in a prime location and included VIP treatment with access to the backstage lounge with Bruce and the band.

In addition, Springsteen took time out in his high energy show to do an on-stage shout out for Foodbank and assisted with the organisation collecting donations from concert goers as they arrived and left the venue.

A delighted Foodbank Chief Executive Gerry Anderson explained "thanks to Bruce Springsteen and Allphones Arena the money raised will help feed and give hungry NSW people 17,000 full meals which is a tremendous result!"?

Allphones Arena General Manager Guy Ngata added "we were asked by Bruce Springsteen's management to assist and support Foodbank NSW during his recent concerts which we happily did. Little did we know how tremendously the Sydneysiders attending the show would support this great cause.

"It really is a fantastic result"

Foodbank is a non-denominational, charitable organisation which sources donated and surplus food from the food and grocery industry to distribute to welfare and community agencies that provide food assistance to people in need. Foodbank New South Wales is a member of a national group of affiliated Foodbanks which includes operations in Queensland, South Australia, Tasmania, Victoria and Western Australia.