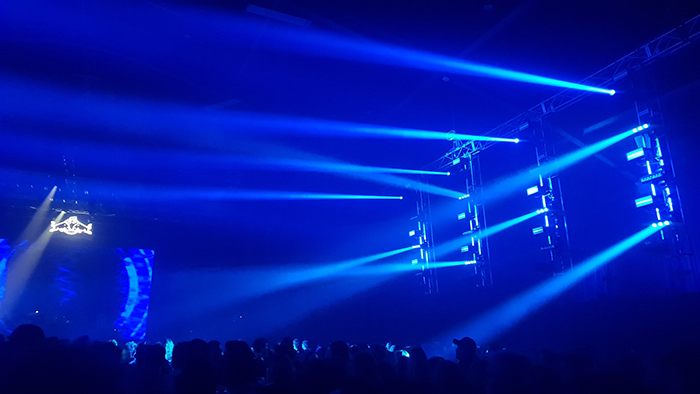 Dark Mofo, created and run by Tasmania’s Museum of Old and New Art (MONA) is a fortnight of festivities which celebrates the dark through large-scale public art, food, film, music, light and noise, all held at venues which may be created or re-designed just for the occasion.

A huge amount of that venue staging, lighting and audio is taken care of by Alive Technologies Group (ATG) and the company’s lighting project manager Nathaniel Collins was at the heart of much of the work.

Collins advised “we do a lot with MONA so as a result of that connection, they brought us on, as the largest local supplier. We can always accommodate some of their more demanding projects."

The brief for this year was responsibility for around 15 of the 18 stages scattered around the whole city, hosting a range of different performances. For such an important project, reliability and versatility are key to the choice of products, and the Alive Technologies Group chose Robe lighting fixtures for those very reasons.

Robe lighting is based in the Czech Republic and manufactures innovative, high quality moving lights and digital lighting products. The Robe brand is still experiencing record growth in all sectors and their products can be found on stages, in concert halls and TV studios all over the world.

For the performances at MAC2 (Macquarie Wharf Shed No. 2), the main venue, the fixtures included Robe BMFL Spots, Robin 600 LEDWash, and pointes. Also among the selection was what Collins calls ‘a lot of’ strobes and blinders, explaining "the fixtures needed to be high output as one of the acts used a large amount of atmospherics and they needed to be able to punch through.”

The company also used brand new Robe MegaPointes at other venues, including highlighting one of the giant 17 metre high inverted crosses for Night Mass. There were four installed around the city, and this one was in a car park that was the central location of Night Mass, home base for the festival’s nightly after-parties. 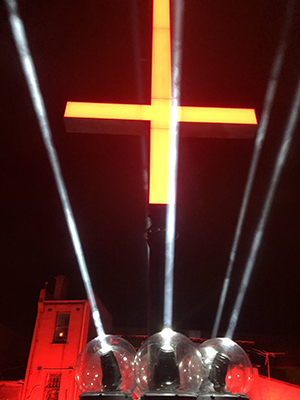 Collins commented “the organisers wanted search lights on the cross from up high, so we built a platform and got some MegaPointes and installed them in domes and used them as searchlights. We bought 10 MegaPointes from Jands and used six for the cross and two more in an alleyway for another design.

“We chose the MegaPointe because we needed a high output beam fixture to achieve an intense search light effect. The fixtures also needed to be small, lightweight and have low power consumption and MegaPointe ticks all these boxes.

“With it being such a versatile fixture, its potential for future events was greatly thought of and its hybrid nature means it can be used in many different configurations. It is an amazing fixture and we are extremely happy with our purchase.”

One of the complicating factors about the Night Mass installation was its sheer size - two city blocks - and the fact organisers wanted one entire lighting network for it.

Collins added “it was complex to set up all the nodes everywhere, interlinking the whole thing through one console. There were around 200 lights involved, and we used an ArtNET link. I’ve certainly never done any network on that sort of scale before.”

In fact, Collins says the scale of the whole project that ATG did for Dark Mofo was challenging, particularly in relation to the set-ups required at MAC2 because it hosted numerous acts over the course of the festival’s two-week run, stating “there were some massive changes between the rigs for those different acts so we had to do some really big turnarounds. We had to pull the entire rig out pretty much, and put in a new one, and sometimes that meant working all night.”

Some of those changes were straightforward, but one particular set-up – a German nightclub look for a performance called Berlin Atonal – required serious planning.

Collins added “we basically covered the entire room with a full weird and wacky truss grid and that was complicated because nearly no truss was hung on two points. One truss was connected to another truss connected to another truss and so on. Then we had lights and cabling all through that; the artist wanted to get the look of a ‘metal sky’, or that’s the words that were used, above the crowd.”

One of the complicating factors for this design was that the designer wanted the entire room black, when the venue is full glass and very light. Collins and his team set up the room with black drapes and carpet – and then had to install some more room lighting so the staging team could see what they were doing.

He conclude “it is one of the biggest and most complex projects we have done. We had CAD layouts for the venues so we did a lot of pre-design in 3D, which really helped us know how it would all come together. I’m not quite sure how we would have managed otherwise.”

For more information on ATG go to www.alivetechnologies.com.au/