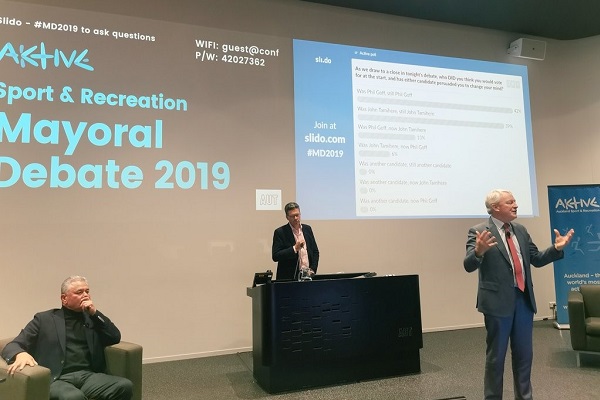 More than 100 people, including sport, recreation and community leaders, academics and advocates, have attended a mayoral debate on sport and recreation in Tāmaki Makaurau, organised by Aktive in partnership with Auckland University of Technology.

Livestreamed and utilising an audience interaction platform, the discussion covered policies, plans and funding with themes including equity across the region, funding and facility strategies, the role of class 4 gambling, and council-controlled organisations.

Advising that the debate and responses are integral in raising awareness of the importance of sport and recreation in the upcoming local elections, Aktive Chief Executive Dr Sarah Sandley noted “sport and active recreation are crucial in the lives of Aucklanders and, given the challenges our city faces, unless we work together, we predict that 1.5 million Aucklanders will be underactive or inactive by 2040.

"That’s why political voices are key to recognising the importance of sport and recreation and realising the incredible impact and value it has on a growing, increasingly diverse Tāmaki Makaurau."

Attendees were polled at the beginning of the event on who they thought would win the debate, then at the end on whether they had changed their mind. Tamihere was slightly ahead at both junctions, convincing a greater shift in his favour at the conclusion of the debate.

While views may vary, what is evident is that the numbers around sport and recreation in Auckland are significant. The one million plus Aucklanders who are active each week are supported by 308,880 volunteers contributing more than 22 million hours of their personal time per annum, worth $337.3 million, to keep the sport and recreation sector moving. In addition, the sector contributes at least $1.9 billion to the Auckland economy, providing more than 25,000 jobs for Aucklanders, and there is a saving of $115.4 million per annum in healthcare costs for Auckland (ACW Auckland City Report 2018, Portas Consulting).

Dr Sandley added "currently around 1.6 million people live in Auckland. Over the next 30 years this number could grow by another 740,000 people to reach 2.4 million (The Auckland Plan 2050, Auckland Council).

“To make sure that we build on its strengths and hold on to the things that are dear to us during this growth, it is critical to prioritise the support and provision for sport and recreation in plans for how and where Tāmaki Makaurau will grow.

"For this reason, those who we vote into leadership positions in our city are critical. Their support or otherwise for sport and recreation impacts this invaluable aspect of our community - so, we encourage all Aucklanders to find out about these potential leaders and ‘exercise’ their sport and recreation vote."

The debate and Mayoral and Local Board candidate responses on views, plans and policies for sport, recreation and physical activity in Auckland can be viewed at aktive.org.nz/our-work/advocacy/