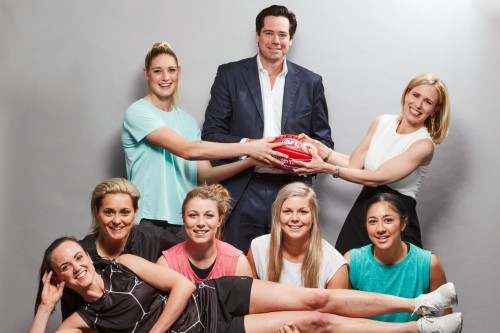 The AFL has revealed AFL Women’s as the official name of its new national women’s competition.

Launched in a collaboration with Instagram, AFL Chief Executive Gillon McLachlan said the new name was developed in consultation with past and present players and the women’s football advisory group.

Announcing the new brand, McLachlan stated “we have been delighted with the public’s response to the establishment of AFL Women’s.

“Our women players have already become inspirations to a new generation of participants, and we know how important their stories are to the future success of the game.

Marne Levine, Instagram’s Global Chief Operating Officer, met with the new league’s marquee players and led the launch of the new name on the @AFLWomens platform.

“The best sports moments have long been captured by enduring and powerful imagery. Now fans can easily access authentic, behind-the-scenes moments by AFL Women’s and support these trailblazers on their road to the inaugural 2017 season and beyond.”

The league is still to launch a logo for the AFL Women’s competition or announce a naming rights sponsor for the league.

Fixtures for the inaugural season are expected to be released in late October.