AFL support grows with Sydney Swans the most popular team 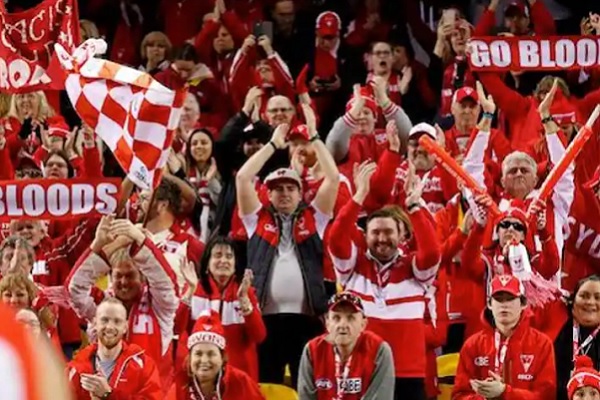 In a season when support has grown for 17 of its 18 teams, the Sydney Swans have again topped the annual Roy Morgan AFL supporter ladder as the only club with over 1 million supporters.

The 2021 Roy Morgan AFL club supporters survey showed the AFL’s 18 clubs experienced a rise in support during the year to June 2021, with a record 8.86 million Australians now “expressing support” for an AFL club. This is an increase of 1.3 million on last year (17.7%), while 7.58 million Australians also watched an AFL match on TV in the past year, down 1.1% on last year.

The Sydney Swans have again been identified as having 1,031,000 supporters, an increase of 27,000 supporters (+2.7%) on a year ago, while major increases in support have been achieved by teams enjoying success during the last two years.

The clubs to experience the largest rise in support include Grand Finalists the Western Bulldogs and Melbourne, 2019-2020 Premiers Richmond and two of the most consistent performers during 2020 and 2021 the Brisbane Lions and Port Adelaide.

The Fremantle Dockers are the only team to experience a supporter decrease.

However, despite having the most total supporters, Swans fans have proven to be the least loyal, converting only 4.9% of its 1,031,000 million fan base into members. 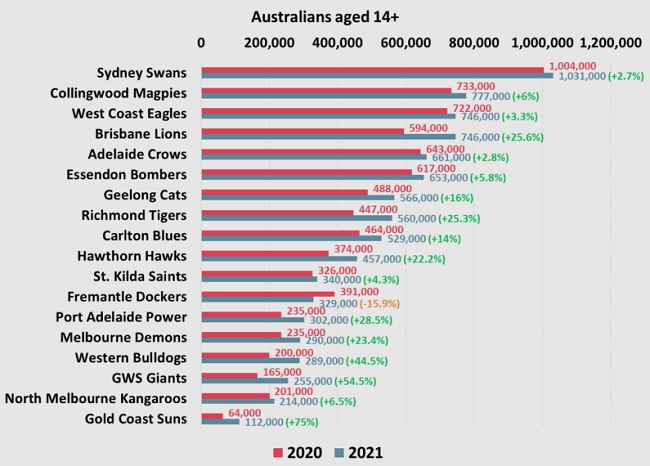 The two teams set to face off in this year’s Grand Final this Saturday land in the bottom five for most supported, with Melbourne at 14th and the Western Bulldogs at 15th. Both have experienced significant increase in support this year however after successful campaigns, with the Demon’s numbers rising 23.4% and the Bulldogs support rising 44.5%.

Julian McCrann, Industry Communications Director, Roy Morgan, says despite the challenges of running an AFL season during the COVID-19 pandemic ,“the biggest winners in terms of increasing their support over the last year are unsurprisingly the clubs that have enjoyed success on the field in the 2020 and 2021 seasons as well as the two newest clubs in the AFL.

“Although the last 18 months have been the most complicated in the history of the AFL with changing restrictions and border closures upending scheduling and sending clubs all over the country, often to play in empty stadiums without any spectators, they have proved a boon for club support.”