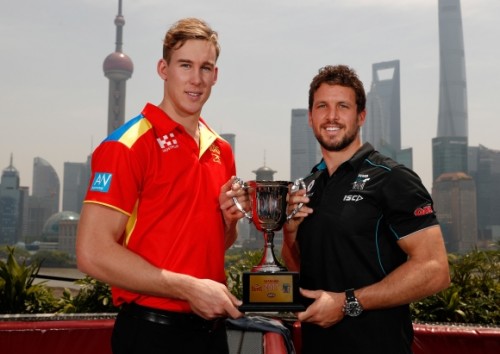 The AFL has announced that three Chinese free-to-air broadcasters will show live coverage of Sunday’s Premiership clash between the Gold Coast Suns and Port Adelaide in Shanghai.

The AFL had faced the prospect of playing in China without having a broadcast partner in the country, but AFL Chief Financial Officer, Travis Auld, said that the deal could now make the game the most-watched match in AFL history with the three broadcast partners reaching more than 1.4 billion people.

While Sunday’s games will be the first AFL regular-season game outside Australia or New Zealand, it is unlikely that the game will attract large numbers in the sport saturated Chinese broadcast market.

CCTV already shows weekly AFL matches on one of its digital sports channels, but viewing figures for these games have not been revealed.

Nonetheless, Port Adelaide in particular is keen to expand its reach in China.

Port will also unveil a new sponsor on the weekend, as part of a range of Chinese-linked sponsorship deals that the club says is the result of an ongoing expansion into the Chinese market.