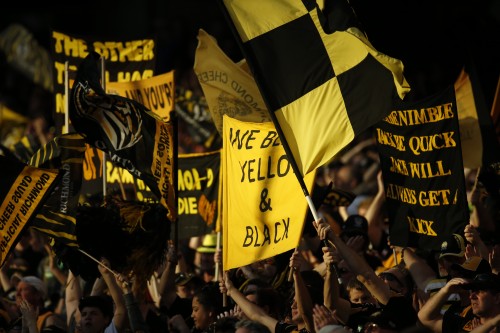 The AFL has announced that its annual revenue exceeded $500 million for the first time in 2015.

Released in advance of the league's 17th March annual general meeting, the figures showed that AFL Chief Executive Gillon McLachlan earned $1.7 million in his first full year in the role.

The figures also shows total attendances of 6,870,586 for games, an aggregate TV audience per round on Seven and Fox Footy of 4.466 million viewers and 104 million aggregate monthly unique visitors to the AFL digital platforms during the 2015 season.

In the wake of the AFL’s new $2.5 billion broadcast rights deal last August the league had begun building a long-term investment model.

Commenting on this, AFL Commission Chairman Mike Fitzpatrick stated “the AFL Commission and executive team have delivered the future broadcast rights agreement, and begun the process of building a new investment model, to ensure we make decisions for the next 20 years, not just for the next six.”

Fitzpatrick added “during this very demanding year, the AFL also began to lay the foundations for the most dramatic change to our game in its 150 years – the establishment of a national women’s league.

“We also reviewed second tier and community football and have grounded our multicultural and indigenous growth strategy in the Next Generation Academies.”

McLachlan’s annual salary attracted considerable media attention, with his earning  $1.3 million in his first seven months as the AFL's Chief Executive with he and his predecessor Andrew Demetriou being paid a combined $3.3 million for the year.

Fitzpatrick added "during our 2015 financial year, the code has grown its revenue, spectacularly increased our digital footprint, grown our corporate partnerships and club memberships and held strong ground with our attendances and ratings.”

Other key elements from the report include:

• Expenditure increased by $12.7 million to $168 million primarily due to revenue related increases.
• The operating surplus before grants and distributions increased by 6% to $337.8 million.
• The AFL allocated $39.4 million of game development grants in 2015.

Before grants and distributions, the operating surplus was $337.8 million.

The report also showed ongoing membership growth over the past 15 years, with more than 150,000 new members in 2015.