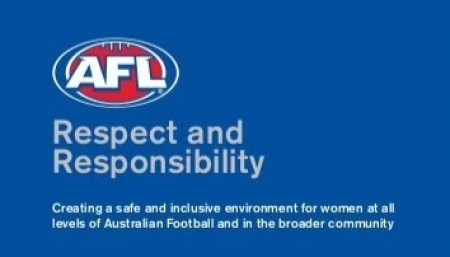 The AFL will receive $400,000 in funding as part of the Federal Government's $9 million Respectful Relationships initiative.

The AFL launched its Respect and Responsibility Program in 2005 and it now runs across all states and territories, including the 16 AFL clubs. The AFL says that since it began, it has received an overwhelming number of requests from community football clubs across Australia for access to the program.

The Minister for the Status of Women, Tanya Plibersek, explained that nearly one in three Australian women experience physical violence in their lifetime, stating "to prevent violence against women in the future, we need to change attitudes and behavior and one of the best ways to do that is to work with young people in schools and sporting clubs.

"The AFL reaches large numbers of young men through its network of community clubs across Australia, so they are an ideal partner for this initiative."

About 9,000 players from state and community football leagues have been through the AFL's Respect and Responsibility program since it was introduced and this new funding from the Federal Government will enable a further 65,000 young players from community clubs to be part of the program.

The program is based around a 90 minute discussion with young players in Australian football clubs around Australia aged between 16 and 21, using a range of tools to raise young menâs understanding of sexual assault, family violence, harassment and abuse. The program also provides young players with information and skills to understand and negotiate situations that have the potential to lead to sexual assault and assist young men to build respectful relationships with women.

Former players will be trained to co-present the program with facilitators who are not footballers, as young men often look up to footballers as role models and mentors at this stage in their lives.

AFL Chief Executive Andrew Demetriou said the AFL had invested significantly in challenging and changing the cultural behaviors and attitudes of players and clubs in relation to the issue of violence against women.

Demetriou explained "the AFL recognises the responsibility it has to provide information, education and support to all levels of state league and community football to help create safe, secure and welcoming environments for all females."

Demetriou said there were more than 700,000 people playing Australian Football and another 100,000 volunteers, and AFL's capacity to influence young men is extensive.

In addition to the AFL's Respect and Responsibility program, an additional nine Respectful Relationships projects have been funded at a cost of over $2.3 million.