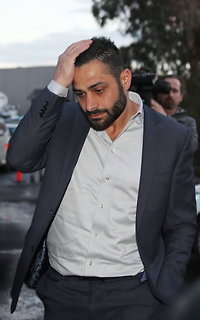 The AFL's Head of Multicultural and Indigenous Partnerships, Ali Fahour, has resigned from his position after having receiving a lifetime ban from playing or officiating in any future Australian rules football matches.

Fahour has also been charged by Victoria Police following an incident where he punched an opposition player in the head at a Northern Football League (Victoria) game last weekend.

Fahour was captured on video punching Whittlesea player Dale Saddington and knocking him unconscious, during a suburban match last Saturday.

He was given a 14-week ban for the incident but has accumulated more than 16 matches' worth of suspensions.

Any player who accumulates a total of 16 weeks of suspensions over his career is automatically deregistered and cannot play in any league, including the AFL and cannot officiate.

Fahour has now been suspended for a total of 21 matches.

The 16-week threshold was introduced by AFL Victoria in 2008 and later nationally.

The Police charges, the most serious of which, intentionally cause injury, carries up to 10 years' jail, will be heard at the Heidelberg Magistrates Court in October.

"As Ali himself said this week - there is no excuse or defence for his actions last weekend. He has expressed his remorse and shame, and I know that he feels this very deeply.

“The events this week have sent a clear message that striking and punching at any level of our game is not acceptable.

“Our Diversity programs are extremely important to our game, they will continue to flourish and grow, and we will prioritise the replacement of this position.”

The statement also saw him address criticisms about its handling to the issue, with McLachlan adding “the AFL has worn some criticism for not speaking sooner, and for waiting for the Northern Football League tribunal hearing.

“I want to make this clear - Tribunals are a critical part of our football community - and their role at every level must be respected. We ask the volunteers and leaders of our community leagues to commit to sitting on Tribunals and making difficult decisions every week, in every league around the country.

“Criticism that the AFL should have spoken before this disrespects the role of those people and processes that keep our game going every weekend.”

McLachlan also acknowledged Fahour’s work over 10 years at the AFL.

Following Fahour’s resignation, Grant Williams, the AFL Head of Community & International Development will be acting Head of Multicultural and Indigenous Partnerships, until a new appointment in the role is made.

It is believed Fahour can apply for re-registration at a later date.

Image: Ali Fahour arrives for a tribunal hearing in Melbourne. Courtesy of the AFL.