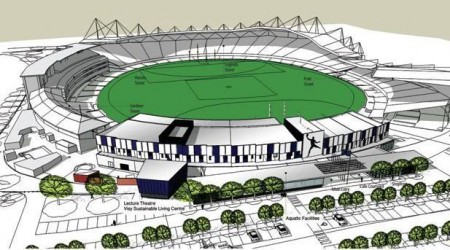 The AFL is again considering plans to develop a new stadium in central Melbourne to help ease the financial burden on Victorian clubs playing at Etihad Stadium.

Reviving a plan for a third major stadium in Melbourne, the AFL is understood to be investigating the upgrading of either Princes Park or Punt Road Oval (pictured) as a 'boutique' 25,000-seat stadium.

In the Punt Road Oval plans, a footbridge would be built from Richmond train station over Brunton Avenue and Punt Road to the stadium. The attraction of the ground is its proximity to public transport and ease of parking at the MCG - where the AFL would not schedule clashing fixtures. However, space to develop the ground is limited due to Punt Road's eastern boundary.

With an existing capacity for around 15,000, Princes Park would be a less expensive option but the venue does not have a nearby train line or parking.

North Melbourne's Arden Street Oval has also been considered as an option but is disadvantaged in terms of public transport and other infrastructure.

Development of a new venue is being considered to ease financial burdens on clubs such as Western Bulldogs, St Kilda and North Melbourne. Currently, these clubs need to draw upwards of 20,000 fans to fixtures to avoid making a loss at Etihad Stadium, and over 30,000 to make some sort of profit.

The AFL is set to take over ownership of Etihad Stadium in 2025 while AFL Commission Chairman Mike Fitzpatrick recently confirmed that it would like to buy the Stadium before that date.

However, he pointed out that while negotiations had been going on for several years, the league and the ground's managers, Melbourne Stadiums Ltd, remained some distance apart on a price.

Fitzpatrick stated "obviously as time goes on, because we will pick it up essentially for nothing in 2025, the difficult issue for us is deciding at what stage it is worth picking up, because we could simply wait it out."

In 2009, the AFL briefly considered a stadium on site near North Melbourne train station and Footscray Road.