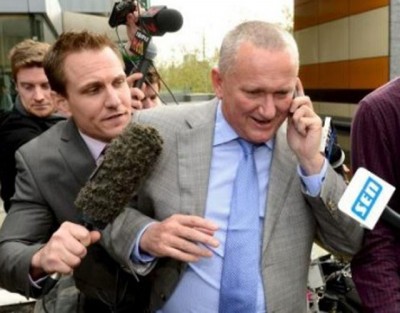 The AFL Anti-Doping Tribunal has handed controversial sports scientist Stephen Dank a lifetime ban from working in the AFL.

Dank was at the centre of the Essendon football club's supplements program which left the Bombers mired in a doping scandal.

He chose to be unrepresented at the tribunal hearing, chaired by David Jones, a former Victorian County Court judge.

In a statement the Tribunal announced "the Australian Football League Anti-Doping Tribunal has concluded its deliberation with respect to the sanction of the former Essendon Football Club support person found to have breached the AFL Anti-Doping Code,"

"The Tribunal has imposed a lifetime sanction, commencing on 25 June 2015."

Dank, who chose not to be represented at the hearing and can contest the verdict at an AFL appeals board, vowed to vigorously fight the sanction.

When informed by the Herald Sun of the news, Dank stated "we will now accelerate our legal action against the AFL and individual members of its executive who are responsible for this decision being handed down.

“They have contaminated the truth and impaired natural justice, and now they will feel the full thrust of the law in relation to how they’ve handled this process.”

Dank in April was found guilty on 10 counts of breaching the AFL’s anti-doping code, including charges of trafficking and attempted trafficking of, and complicity in, matters related to prohibited substances.