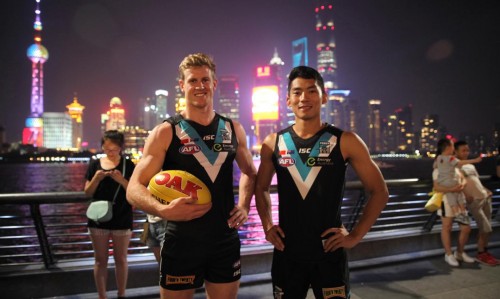 The AFL will become the first foreign professional sport to host a regular season match in China, when Port Adelaide Power plays the Gold Coast Suns in Shanghai on 14th May next year.

Port Adelaide have been the driving force behind AFL’s expansion in China, with the fixture to take place during round eight, with both teams having a bye the week after.

In April, Port Adelaide signed a memorandum of understanding to take a Premiership season fixture to Shanghai less after having earlier signed a broadcast deal on China Central Television.

The match will be held at the Shanghai’s Jiangwan Stadium, the same venue that hosted an AFL exhibition game in 2010 between Melbourne and Brisbane.

The stadium is expected to hold 15,000 spectators after it is reconfigured from its rectangular shape with new turf laid.

AFL Chief Executive Gillon McLachlan explained “our game exists in a global sporting market place, and this event is part of our broader strategy to reach into new markets, both inside Australia, and across our region.

“The Port Adelaide Football Club have been the leaders into the Chinese market and I thank them for their success and drive to continue growth in this market.”

Port Adelaide’s China and Government Relations General Manager Andrew Hunter, said the idea for the fixture came from a “passionate Port Adelaide supporter” who was living in Hong Kong.

Hunter explained “Denis Way contacted the club with the idea of engaging in China.

“It coincided with an aggressive strategy to expand the club’s commercial footprint, so it aligned perfectly and was supported by the chair and the board.” 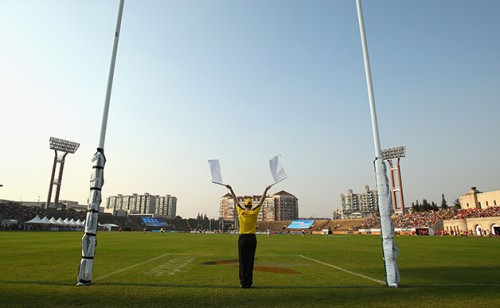 The Shanghai fixture will see Port Adelaide take on full host team rights – they will wear their home guernsey and have signage rights – and will retain 11 home games at Adelaide Oval, having purchased a Suns’ home fixture.

Gold Coast Suns Chairman Tony Cochrane welcomed the fixture, adding “this is a historical moment for our game and we are excited by the opportunity that awaits, not only in China but also for us on the Gold Coast.

“China is the number one international tourism market for the city of the Gold Coast, and increasingly both China and the Gold Coast enjoy a strong tourism and business relationship.”

The AFL has taken Premiership matches outside Australia before, with St Kilda playing a home game in New Zealand from 2013 to 2015.

The first of two Grand Final rematches will take place at Etihad Stadium on the Friday night of round two, when the Bulldogs will unveil their 2016 premiership flag.

The AFL has increased the number of Thursday night games from five to eight, with two at the MCG over the opening fortnight of the season and another at the redeveloped Simonds Stadium in round 10. That game will be the first of five consecutive Thursday night games.

Canberra's Manuka Oval will also stage its first ever Friday night game in round six when Greater Western Sydney hosts the Bulldogs in a rematch of last season's magnificent preliminary final.

It will be the Giants' Friday night debut and will mark the first of three prime-time games for GWS in 2017.

Images: Port Adelaide Football Club defender Tom Jonas and Team China captain Chen Shaoliang in Shanghai (top) and an AFL exhibition game between Melbourne and the Brisbane Lions at Jiangwan Stadium in 2010 (below).