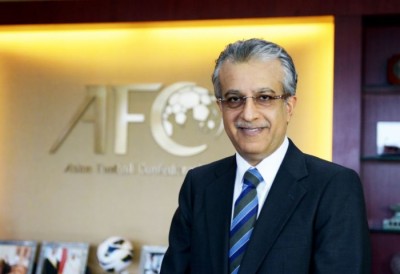 The re-election of Sheikh Salman Bin Ebrahim Al Khalifa as President of the Asian Football Confederation (AFC) for a second term and as Vice President of world football governing body FIFA has taken place amid unanswered questions about the AFC's handling of corruption investigations and his apparent failure to enforce good governance in his own organization as well as among its members.

James M. Dorsey reports that in an indication of the AFC's apparent weak adherence to standards of propriety, the group decided to move the congress at which Sheikh Salman (pictured above) was re-elected from Kuala Lumpur to Bahrain, the candidate's home country, even before it became clear that he would not be challenged in the election.

The move appeared to be a an attempt to shine a positive spotlight on a regime that brutally suppressed a popular uprising in 2011 and has since been marred by a crackdown on opposition and persistent allegations of torture and other violations of human rights by officials that include top sports executives. The omnipotence of Bahrain's intelligence service was recently highlighted when it barred a scholar entry because he had been interviewed by Al Jazeera despite appeals by senior government representatives who had invited him.

The AFC's non-transparent, manipulative politics were on display at the Bahrain congress, reaffirming former AFC General Secretary Peter Velappan's assessment in 2011 that "there is no democracy in AFC."

Sheikh Salman prevented Korean Football Association President Chong Mong-gyu from expressing criticism of gerrymandering of elections for Asian representatives in FIFA's executive committee that ensured that Kuwaiti Sheikh Ahmad Al Fahad Al Sabah, one of the most powerful figures in international sport, won the seat that could position him for a candidacy for FIFA’s Presidency in 2019.

Sheikh Salman argued that such criticism would assault the AFC's integrity and respect.

Similarly, FIFA President Sepp Blatter (pictured below) was allowed to address the congress as well as a gala dinner but his challengers in next month's FIFA presidential elections were not.

In his speech, Blatter commended Sheikh Salman for his stewardship of the Asian body, particularly his "cleaning up" of the AFC in the wake of a massive corruption scandal involving disgraced former AFC President and FIFA Vice President Mohammed Bin Hammam. 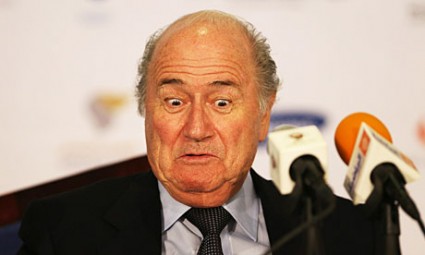 It took the AFC four days to respond to assertions video-taped and made in writing to a FIFA security officer by the group's finance director, Bryan Kuan Wee Hoong, that he had been asked by General Secretary Dato Alex Soosay to "tamper or hide any documents" related to him during corruption investigations in 2012.

In an emailed response to the Malay Mail, the AFC said that it had taken note of the joint disclosure of Kuan's statements on this blog and in the Malay newspaper and was "currently seeking to assess the veracity of these allegations."

Soosay figured prominently at the Bahrain congress sitting on the dais next to Sheikh Salman.

Sources close to the AFC said that the AFC had to date not contacted FIFA security officer Michael John Pride who had taped Kuan's statement and taken his written testimony. Similarly, Kuan, who was involved in the administering of the Bahrain vote, has yet to be asked to produce his statements and explain what had happened. Alex Philips, an official of UEFA who has been seconded to the AFC, did however ask Malay Mail executive editor Haresh Deol for a copy of the tape.

A source close to the AFC said the request was "part of the process of checking that the tape is authentic and being able to view the tape."

Asked what the AFC would do once the tape had been authenticated, the source said “we'll have to see."

Some sources close to the AFC and the investigations three years ago into AFC's management expressed scepticism that the group would act on the evidence." The AFC will not ask any questions or look into it as they want the story to pass as soon as possible," one of the sources said.

The AFC's delayed and non-committal response may have much to do with the fact that Sheikh Salman has effectively buried a 2012 audit by PricewaterhouseCooper (PwC) that warned that the AFC could be held liable for payments made by a shareholder of Singapore-based World Sports Group (WSG) to Bin Hammam in advance of the signing of a $1 billion master rights agreement.

The audit said the AFC may have been used to launder money, and could have breached sanctions against Iran and North Korea. PwC advised the AFC to seek legal counsel on the possibility of filing a civil complaint or criminal charges against Bin Hammam and on whether it could renegotiate or cancel the WSG contract.

“As signatories these parties hold accountability for the authorisation of these transactions. We also note the Internal Audit and Finance Committees were aware of this practice.”

Malaysian police sources told the Malay Mail that the police had been asked by the attorney general to submit by 13th May a report on the alleged theft of documents from the AFC's Kuala Lumpur headquarters.

Kuan had reported the theft days after he recorded his statements regarding Soosay's alleged request. The sources said they hope Kuan's statements would further their investigation.

Malay Mail Executive Editor Haresh Deol was interviewed by police on Thursday, with the Malay Mail quoting a police source as saying "a new IO (investigating officer) is working on this case.

“The file was passed to him two weeks ago and he must submit the papers to the deputy public prosecutor's office by May 13.

“With this new lead, there could be a possibility of calling up the parties concerned in the video to facilitate investigations.”

Speaking to Agence France Presse, Soosay, who earlier denied Kuan's assertions, insisted that "the case is closed. It was thoroughly done and dealt with and Bin Hammam was suspended."

Soosay claimed that Kuan's statements had been deliberately leaked in advance of the AFC election, stating "it's completely, I don't know, all of a sudden taken out of context. It's election fever. But there's nothing to worry about, there's no concern. It's dealt with.”

Pointing to multiple unanswered questions, particularly as a result of the latest revelations, Deol asked in a column in response to the AFC statement: "I would like to know if Kuan had lodged a formal complaint to AFC president Sheikh Salman Ibrahim Al Khalifah regarding the matter. If yes, did Salman take any steps to address the issue?

“After all, his promise, when made president in 2013 was to initiate reforms. Also, shouldn't Pride have reported it to FIFA?... what about the…revelations made by PwC? There is a lot of explaining to do. We are stakeholders and we demand answers. Silence is not an option."

The attempted burial of the audit and the AFC's non-transparent handling of Kuan's assertions are noteworthy given the corruption and integrity crisis global that has enveloped soccer governance in the last four years. The squashing of the PwC audit has meant a lack of good governance within the AFC on multiple levels.

In one example, Gaurav Thapa, the son of Ganesh Thapa, who has been suspended by FIFA pending an investigation into corruption charges, was appointed AFC match commissioner despite having been named in the PwC audit as one of numerous recipients of questionable payments by Bin Hammam.

"All of the Nepalese associations' affairs are run by Thapa. Everything is handled by his son. We don't know anything. We just know that he is match commissioner. The Nepalese federation did not nominate him," said Karma Tsering Sherpa, Vice-President and an executive committee member of the All Nepal Football Association (ANFA), in a telephone interview.

Sherpa together with ANFA vice president Bijay Narayan Manandhar said in a 15th February letter to Robert J. Torres, a member of the ethics committee of FIFA's investigatory chamber, FIFA general secretary Jerome Valcke, and Soosay that Ganesh Thapa in violation of ANFA's statutes and despite his suspension was keeping ANFA executives "in the dark" about the group's affairs, including audits of "unappropriated cash movements" and an ethics committee investigation.

Members of the ANFA board charged this week that Thapa despite his suspension had barred the association's acting president, Lalit Krishna Shrestha, and general secretary Dhirendra Pradhan from attending the Bahrain congress. The association instead sent Thapa's brother in law, Mani Kunwar, who is also a member of the board. Asked whether the fact that he was the only head of an Asian football association not to have been nominated for the AFC Congress, Shrestha said in a telephone interview: "I agree with your logic. We have to compromise. That's why we sent my friends."

Sherpa said Kunwar had been sent to Bahrain despite the fact that four members of the Nepalese association, including Sherpa and two other vice presidents had filed a separate complaint to Messrs. Torres, Valcke and Soosay against Kunwar. In the complaint, they accused Kunwar of behaviour unbecoming of a national or regional soccer official. The complaint was based on allegation by Kunwar's wife in the Nepalese media and a Nepalese court of having been robbed of her belongings by her husband and having been beaten by both Kunwar and Thapa's wife.

FIFA and Soosay have yet to respond to the complaint.

Ironically, the AFC funds Nepalese anti-gender violence NGO Saathi. The NGO has yet to publicly comment on the allegations against Kunwar and other members of Thapa's family.