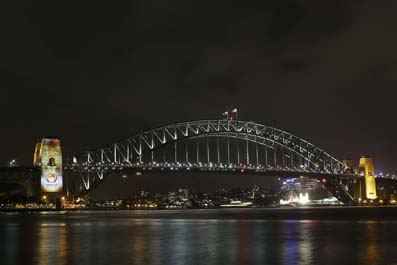 Kicking off today, the Asian Football Confederation (AFC) Asian Cup will be the largest football event ever hosted on Australian shores. Staging a marquee event for the top nations of the AFC comes at a time when there is growing recognition of the potential to leverage football, and Australia’s membership of the AFC, to broaden and strengthen engagement in a region vital to Australia’s future prosperity.

Former Austrade Media Advisor David Varga explains “as the true world game, football enjoys a unique position among the family of international sports, inspiring passions in every corner of the globe and garnering rising support across the many nations of Asia.

“The 2015 Asian Cup not only offers a unique opportunity to engage neighbouring nations in a world-class festival of football, it could help Australia take a footing in the Asian Century itself.”

Asia’s extraordinary ascent, which has already changed the Australian economy, society and strategic environment, will continue to drive transformations and deliver opportunities for growth throughout the ‘Asian Century’.

Australia’s hosting of the AFC Asian Cup also provides a fantastic opportunity to reinforce the country’s international reputation as a top class, welcoming host for major events and also as a highly desirable destination, according to Tourism Australia Managing Director John O’Sullivan.

O’Sullivan explains “the teams have arrived in Australia along with tens of thousands of international football fans who are all here to lend their support.

“This 23 day ‘festival of football’ provides the perfect platform for Australia to showcase our credentials as a great place to visit amongst some of our most important overseas markets.

“With more than 500,000 spectators - including around 30,000 fans from overseas - expected to attend the 32 matches being played across Sydney, Melbourne, Brisbane, Canberra and Newcastle, this is a tourism free kick. Thousands of international football fans will have ample opportunity to explore our five host cities and their surrounding tourism regions. Australia is a nation of warm and welcoming sports fans. No matter which city fans base themselves in, there will be an array of activities and experiences available to explore.” 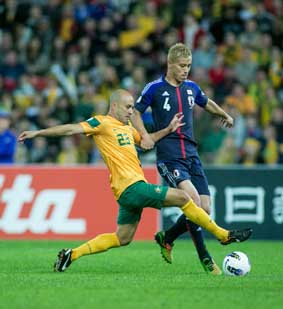 PricewaterhouseCoopers have estimated that the GDP impact from hosting the Asian Cup could be as much as $23 million.

Leveraging the appeal of the world’s most popular sport to tap into Asian growth markets has already been put into practice. In 2011, for example, Australian footballer Joel Griffiths, then a star player in the Chinese domestic league, helped draw a crowd to a business breakfast in Beijing to facilitate trade engagement. The Australian Trade Commission (Austrade) has also staged trade promotion and business-networking events for the 2010 FIFA World Cup in South Africa.

Brown states “the 47 countries of Asia embody over half the world’s population and in most countries, football’s popularity is already strong and rising. By 2020, 380 million people will be playing football across the region.” 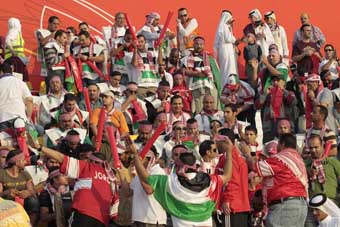 With a potential television reach of 2.5 billion people, Brown is acutely conscious of the stage for both national and destination image building that he has taken carriage of.

He adds “through the Asian Cup we have the opportunity to increase our standing in 80 countries overall, and propel a positive image of Australia to a massive audience.”

One immediate benefit lies in promoting Australia as a tourism destination, with visitors arriving from AFC nations in Asia and the Middle East.

Here Brown explains “we (have been) working very closely with Tourism Australia to discover new ways to drive tourism initiatives before, during and after the event – all of which also help build people-to-people links in addition to tourist income, as fans extend their visitation experience beyond matches.

“There is a particularly strong opportunity in some of our most prospective tourism markets like China, where visitation rates to Australia are rising 20% year on year.”

The event will also bring 3,500 journalists, a critical mass of media interest that will also paint a picture in minds of Asian and Middle Eastern people of contemporary Australia in lifestyle, business and cultural terms.

In addition to the media presence and passionate fans, the 2015 Asian Cup will see visits to Australia by royalty, heads of state, government ministers and officials, and business leaders.

Brown also sees that the tournament will open doors for business, tourism and trade and investment, as well as creating new community connections, adding “seven of our top 10 trading partners are in the AFC region.

“The fact that Federal and State Governments have invested heavily in the Asian Cup shows that they understand and are committed to using the opportunities football presents.”

“Austrade is encouraging high level government and business delegations to visit Australia during the AFC Asian Cup to meet with Australian companies to do business and network. Events have been or will be held in Korea, as well as Soccerex in Jordan, UAE, Qatar, Japan, China, and Korea in the lead up to the tournament.”

Brown points out that international football can, above all, promote the values of competition elite performance in the most positive sense, with rivalries on the pitch more often than not making way for greater understanding and lasting goodwill, adding “you only have to look at the rivalry which has formed to inspire both sets of national fans when Japan and the Socceroos compete.

“It is the goodwill sport generates which can also foster ties between business communities,” Brown says, pointing to Austrade’s work in leveraging trade outcomes through sport, conducting a range of initiatives tailored to major sporting events such as the Olympic Games.

Local community participation is also a priority for Brown, which includes engaging with schools and creating education programs, as well as building links across the growing football family within Australia.

Brown states “we hope to fully engage the many multicultural football communities in Australia.

“Their passion for football has helped underpin the fan base of the A-League and the game’s growth, and will help bring the unique cultural influences in football to add colour and atmosphere to the event, including the more than 2.5 million Australians of Asian heritage.

“Through our schools program, our goal is to teach more young people about AFC nations and the Asian region, as well as encourage more young people to play football, which is the ideal way to build the game over the longer term.”

Brown is confident the 2015 Asian Cup experience will have something truly unique to offer fans, in what will be a regional and global celebration of football, concluding “Australia is home to a growing passion for football and the Socceroos, a history of hosting globally successful major events, world-class facilities and sports business expertise, as well as unparalleled destinations and diversity.

“Obviously one goal is to fill stands, but the critical benchmark of success is leaving a lasting legacy for the game in Australia, our image in the region, and a better understanding amongst Australians of our place and future role within Asia.”

The Federal Government is also undertaking a series of business events around the 2015 ICC Cricket World Cup, being co-hosted by Australia and New Zealand from 14th February to 29th March.

Australia will host 26 of the 49 matches with the final being held at the iconic Melbourne Cricket Ground.