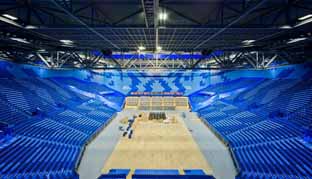 The Western Australian Government has named AEG Ogden as the preferred tenderer to operate the new Perth Arena.

AEG Ogden Chairman and Chief Executive Harvey Lister said that AEG Ogden was pleased the Government and VenuesWest had entrusted the operation of this stunning new state-of-the-art arena in Perth to the company, stating "we have already commenced discussions with some of the established

Australian and international promoters of major concert, sports and other entertainment events and we look forward to revealing an exciting range of events at the Perth Arena as its opening date draws closer."

AEG Ogden is part of a 'global family' of facilities spanning five continents, which includes iconic venues such as the Staples Centre at LA Live, London's 02 Arena, Shanghai's Mercedes Benz Arena and a network of Asia Pacific venues including Acer Arena at Sydney Olympic Park and the Brisbane and Newcastle Entertainment Centres.

Lister explains that AEG Ogden already has a strong presence in Western Australia through the management of the Perth Theatre Trust Venues, which includes His Majesty's Theatre and the Perth Concert Hall.

He adds "we are proud of the success our team has been able to deliver during the past 11 years at these Perth venues and are equally excited about the challenge of adding to that success through the Perth Arena.

"We understand that we were up against some strong competition for this project including from catering companies like Spotless and experienced international operators. But we expect that the Western Australian Government recognised the benefits that will be delivered by a specialist professional management company with the strength of our network of venues in Australia - and the 100 plus venues which make up the AEG global family of facilities.

"AEG Ogden now looks forward to meeting with VenuesWest and finalising the details of the arrangements for our appointment."

Located in Perth's new Northbridge Link precinct, the 15,000 capacity Perth Arena has been designed to maximise flexibility and will have a curtaining system in the auditorium to reduce the seating mode as required to allow events with between 4,000 and 8,000 patrons to be staged. The Arena will hold 14,500 boxing fans, possible basketball matches, international netball, martial arts tournaments, and national indoor sports championships.

AEG Ogden is a joint venture between the Australian based Ogden IFC and the Anschutz Entertainment Group of the United States.

VenuesWest's operations were featured in the May/June 2010 issue of Australasian Leisure Management.