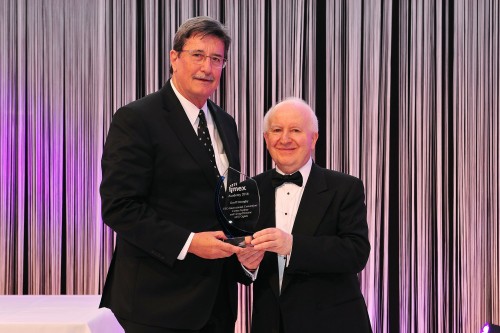 AEG Ogden Group Director of Convention Centres, Geoff Donaghy, has this week been recognised for his outstanding service to the meetings industry with an IMEX Academy Award for the Asia Pacific region at the 14th annual IMEX Gala Dinner in Frankfurt.

Donaghy (pictured) was honoured with an IMEX Academy Award at the globally renowned event (held on the evening of Thursday 21st April, with the prestigious accolade presented by IMEX Group Chairman, Ray Bloom.

Lister stated “Geoff is one of the most experienced convention centre leaders in the world and we are immensely proud to see this recognition through the IMEX Academy Award.

“AEG Ogden is responsible for the management of the largest network of venues within the Asia Pacific region and Geoff has played a pivotal role in our success since joining us over 20 years ago.

“He has driven the launch and management of a number of AEG Ogden venues over the years, starting with the pre-opening and management of Cairns Convention Centre in 1994 through to assisting the global expansion of AEG’s network in the United States, where he supported the local team to win the management right contracts for both the Los Angeles and Hawaii convention centres.

“Geoff is also responsible for ensuring each of these high performance assets benefit from our global marketing and professional development networks.”

Donaghy is also President of the International Association of Congress Centres (AIPC), and representative to the Joint Meetings Industry Council (JMIC). He is also a former Chairman of the Business Events Council of Australia and has previously been awarded the Australia Centenary Medal by the Federal Government, the Australian industry’s Outstanding Contribution Award, and the JMIC’s Global Power and Profile Award.

Aloysius Arlando, Vice President the International Association of Convention Centre (AIPC) said the award is a testament to Geoff’s ongoing contribution to the business events industry and in the case of AIPC, providing strong leadership to an organisation representing the interests of more than 175 major convention centres in 57 countries around the world.

Arlando stated “AIPC is committed to encouraging, supporting and recognising excellence in convention centre management, and given his achievements in this regard, Geoff is the ideal representative. On behalf of the entire membership, I want to add our collective congratulations to him on achieving this distinction and helping profile our organisation as a quality leader.”