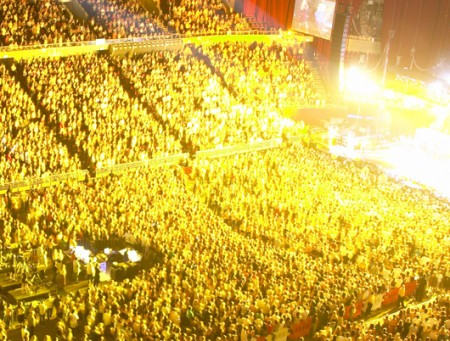 AEG Facilities has welcomed its showing in Pollstar magazine’s 2016 Year-End Rankings of the world’s top arenas, which strong performances by its managed venues around the world.

Based on ticket sales, the top arena in the world was once again AEG Facilities’ The O2 in London, while AEG Facilities-affiliated venues accounted for four out of the top 10 arenas worldwide.

Overall, AEG Facilities’ venues accounted for 47% of all tickets sold in the top 20 arenas throughout 2016.

In total, AEG Facilities-venues sold more than 12 million tickets in 2016. 27 arenas owned, operated or affiliated with AEG Facilities were named in the list of the top 100 arenas worldwide for the 2016 year-end rankings as compiled by the well-respected concert and venues industry publication, Pollstar magazine.

For the 10th consecutive year since opening its doors in 2007, London’s The O2 topped the list with more than 1.5 million tickets sold in 2016. Barclays Center in Brooklyn, New York ranked number two in the United States and seventh worldwide, while Miami’s AmericanAirlines Arena ranked fourth in the USA and 15th worldwide.

Commenting on the impressive performance, AEG Facilities President Bob Newman stated “we are proud of AEG Facilities’ rankings in Pollstar’s 2016 Year-End report, and again are excited to see our global network of elite venues leading the way in attracting and hosting the world’s greatest events.

“With 27 of our venues ranking in the top 100, it continues to showcase the strength of our global network and growth of our worldwide division.”

The complete list of venues AEG Facilities owns, operates or is affiliated with that placed in the Top 100 for Pollstar’s 2016 Year-End Rankings include:

Pollstar is the leading international publication for the concert industry, which annually publishes a list of the Top 200 arenas in ticket sales worldwide.