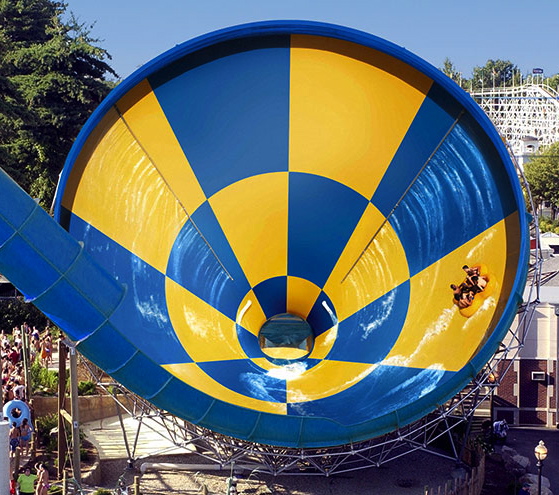 A fully themed, monster mega waterslide is to be added to the attractions at Perth theme park Adventure World in time for the peak summer season.

When it opens the ProSlide Tornado 60, the longest, steepest and tallest Tornado slide on the planet, will drop guests 30 metres along its 260 metres course

Winner of a prestigious ‘Impact’ and Best New Water Park ride awards from the International Association of Amusement Parks and Attractions (IAAPA) in 2013, the

Tornado 60 is widely recognised as one of the world’s favourite water ride.

At Adventure World, the enormous world record-breaking slide will be like no other Tornado ever built. A four-person raft will negotiate over 150 metres of dark twists and turns including a heart-pounding drop and a 360 degree twist before reaching the crescendo of the massive 20 metre funnel –the height of a six-storey building.

At this point riders can reach speeds up to 6.7 metres per second as they experience moments of zero gravity alternating with intense drops. 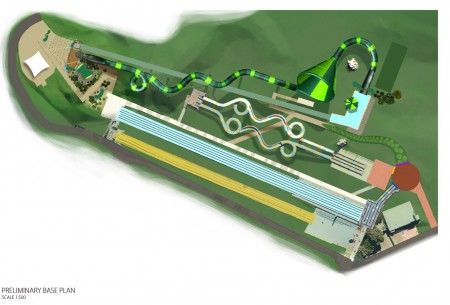 Riders will feel they are about to tip before gravity pulls them back to the bottom and up the other side and finally through the dark outrun flume and into the landing pool.

With 78 installations across the globe, Canadian manufacture ProSlide has custom-designed this Tornado 60 to give Adventure World’s guests a ride they will never forget.

Instead of a starting tower, the new slide follows the contour of the chair lift hill down to the base next to Adventure World’s other slide exits.

As many as 600 riders an hour will brave the twists, turns and gravity-defying exhilaration of the ride.

Adventure World Chief Executive Mark Shaw said it was the second time in just three years that the park had invested in a world-class attraction, stating “people tell us they think Abyss is the best rollercoaster in Australia and I think there is a very good chance they will soon be telling us the new slide is the best water slide in Australia which I think is great for Western Australia and reflects our status as a premier theme park enjoyed by locals and tourists alike.

“The great thing about the Tornado is that it can take four people at a time which means much shorter queues and a great shared experience, either with mates or mum, dad and the kids.

“The ride also has a relatively low height restriction at 120cm which caters for the average height of a seven year old. It also has a different ride experience each time because depending on the weight distribution in the raft and the flow of water, you could find yourself dropping 30 metres head first, sideways or best of all, backwards!

“Each ride experience therefore is slightly different! I have tested a lot of water slides and this one for me is by far the king of them all.”

While tight security surrounds the name and theming of the new ride – code-named Mi2 (Maximum impact 2) – the enormous task of constructing Adventure World’s latest attraction is well underway and should be complete for the park opening this October.

Construction is also tracking along as planned for the intricate Triodetic Space Frame, which will hold the giant funnel in place. The funnel will sit 4 metres off the ground, making for great spectator viewing too. The 50 shipping containers bringing the fibreglass sections for the flume section of the ride have also started to arrive in Perth. 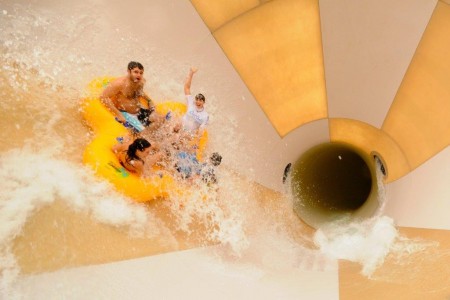 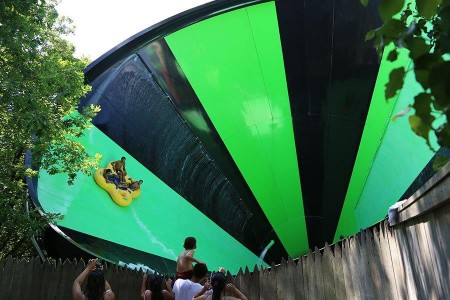 The handcrafted fibreglass sections come in small half-pipe pieces that are then bolted together on the ground to make a full pipe section that is 3 metres in diameter.

Six pipe sections are then bolted together on the ground before being craned into place.

Two immense concrete ballast tanks are now in place below ground. The tanks, which between them hold 94,000 litres of water, each have a lid weighing a massive 11 tonnes.

Adventure World have opted for the Neptune Benson ultra-fine filtration system as opposed to a conventional sand system which will reduce water consumption by around half a million litres per season.

Other improvements to the park for 2015/16 include a refurbishment of bumper boats complete with new theme, additional Cabanas and shade around the park as well as upgrades to the young family’s area, Dragons Kingdom theming.

Adventure World’s mega slide will open in early October this year, shortly after the theme park’s season opening on Thursday 24th September – at the start of the school holidays.

Images show other ProSlide Tornado 60 installations. Diagram shows how the ride will be sited at Adventure World.