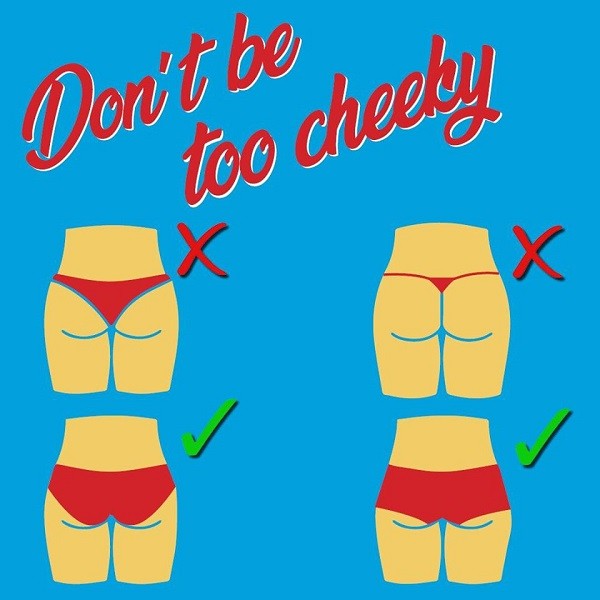 Perth theme park Adventure World has been in the news in recent weeks following a request for guests using its waterpark are to "choose appropriate swimwear when visiting".

The Bibra Lake attraction created headlines when it posted a bather bottom guideline on Facebook, taking a stand against skimpy swimwear at its family-oriented waterpark area.

Asking patrons not to be “too cheeky” when visiting, the new dress code immediately sparked fierce debate among followers and subsequent media attention.

The Facebook post advised “Adventure World is a family friendly park, please choose appropriate swimwear when visiting”, alongside an infographic showing that thong and string bikini bottoms were now prohibited.

The post attracted more than 8,500 comments and 1,200 shares, with some welcoming the rules, saying it was inappropriate for children to be lining up for rides behind people with almost-bare bottoms.

However, others called the dress code ridiculous, labelling it “sexist” and a form of “body-shaming”.

Adventure World said in a later statement that its dress standards were in line with other water parks around Australia, and as a family-friendly venue, it felt the rules were appropriate.

“Adventure World is a family friendly theme park. We keep informed of industry trends and whilst this was not a decision taken lightly, it is in line with other parks nationwide.

“We are not the first park in Australia to update their dress standards on this subject, nor are we the only venue in WA that has addressed the matter with a similar policy.”

The theme park’s official conditions of entry state that visitors are welcome to wear whatever swimwear they feel comfortable in, “providing it is suitable for a family environment”.

The follow-up continued to draw criticism from the public, with the issue of men being allowed to wear 'budgie smugglers' raised as a contradiction to the ‘family-friendly’ stance.

Dreamworld’s conditions of entry state "to ensure a safe and enjoyable family environment, provocative, G-string swimwear or underwear as swimming attire is not allowed.

“If your clothing or swimwear does not comply with these regulations, appropriate attire is available for purchase at Beyond the Beach Gift Shop.”

Adventure World has previously been in the news in relation to swimming attire.

In 2010, a Muslim woman won compensation and a written apology from its then management after she and her friends were refused permission to go on water rides because of their clothing.

Pakeeza Shaikh won $16,000 in compensation in May 2010 following a year-long court battle as a result of Adventure World staff telling her group that they could not ride waterslides because of inappropriate swimwear.

Main image: Adventure World's request to patrons not to be “too cheeky”.