The South Australian Government has announced a $35.2 million investment over three years for the redevelopment and expansion of Adelaide’s Her Majesty’s Theatre - one of Australia’s last remaining Tivoli theatres - in order to attract more touring productions to the venue.

The funding will be used to build a new entrance and foyer on land adjoining the historic theatre, expanding the theatre's original auditorium by up to 570 seats, the modernisation of facilities for artists, including improved orchestral pit and technical facilities, and a back of house upgrade.

The South Australian Government has also reversed earlier arts funding cuts, also announcing that it will spend $15.7 million on arts over four years including $700,000 for the Adelaide Festival of Arts, $3 million for Arts South Australia and $4 million each year to drive economic activity and job opportunities in the arts.

Her Majesty’s Theatre has been an Adelaide landmark since 1913, but its current capacity of 970 seats makes it an unviable option for large scale productions.

It is anticipated that the transformation will enable the venue to host at least 50 additional performances each year and reposition it as a leading venue option for touring productions. 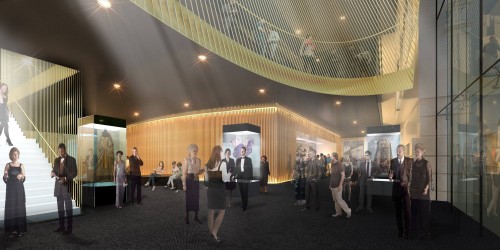 He explained “over recent years, a number of blockbusters, including The Lion King, Les Miserables and other theatrical, comedy and music products, have been bypassing Adelaide because of our shortage of large theatrical venues.

"This upgrade will provide a home for large-scale performances like this and further put Adelaide on the map.

“We know the audience demand exists for these shows but there is nowhere for them to play because the 2,000 seat Festival Theatre is Adelaide’s only large scale commercially viable theatre in South Australia and it is full to capacity.

“A second large theatrical venue will also enable the South Australian performing arts companies, especially the Adelaide Symphony Orchestra and the State Opera of South Australia, greater access to the Festival Theatre so they can put on nationally significant works.”

The Adelaide Festival Centre Trust, which manages the venue, is raising $3 million to contribute to the project while the South Australian Government will spend an additional $1.1 million over two years supporting the Trust during times when the theatre is closed for renovations.

South Australian Arts Minister Jack Snelling added “this redevelopment … is another proud moment in the long history of Her Majesty’s Theatre. It’ll ensure that this Adelaide institution remains one of the best venues for performers from near and far.”

A second large venue will also benefit the Adelaide Festival of Arts and will allow the South Australian performing arts companies, especially the Adelaide Symphony Orchestra and the State Opera of South Australia, to have more time in the Festival Theatre to present nationally significant works. Have a look at these artist impressions of what the new Her Majesty's Theatre could look like!

Planning for the redevelopment will start immediately, with construction concluding in late 2019.

Images: Artist's impressions of the upgrade to Her Majesty's Theatre.