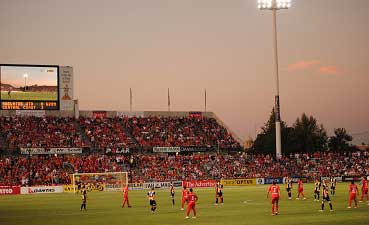 Adelaide's Coopers Stadium (the former Hindmarsh Stadium) is benefitting from a $1 million upgrade funded by the Adelaide Entertainments Corporation (AEC).

AEC's investment is part of an ongoing plan to upgrade the ageing venue in order to make it compliant with world football governing body FIFA standards to host international football matches. To be FIFA compliant, the venue needs a minimum seating capacities of 20,000.

Due to its 16,500 capacity, 3,500 seats short of the FIFA standard, Coopers Stadium was bypassed for Australia's hosting of the 2015 Asian Football Confederation Asian Cup.

AEC Chief Executive Anthony Kirchner told Adelaide Now that the Corporation, which began managing the venue as of 1st July, is aiming to make the purpose-built football facility FIFA compliant while also also upgrading F&B facilities at the ground to make it quicker and easier for fans to access during A-League clashes.

Kirchner stated "(we) are looking at ways to further enhance the stadium going forward (and are) currently in discussion with Events SA in trying to bring Asian Cup nations to Coopers Stadium to use it as a training base before the tournament."

AEC has increased the rent payed by the Stadium's key tenant, Adelaide United, from the amount charged last season - believed to have been $25,000 per match.

Kircher admitted "there is a slight rental increase, but it is about 50% cheaper than what most other A-League clubs pay for during each season."

The AEC is also budgeting for a $250,000 trading loss for the 2013/14 financial year after the venue cost the South Australian Office for Recreation and Sport about $600,000 per year in operating losses.

Coopers Stadium was last upgraded, at cost of $30 million, for the Sydney 2000 Olympic Games football tournament, the cost of which was the subject of considerable controversy.

The Stadium's then tenants, National Soccer League clubs Adelaide City and West Adelaide, were asked to use a levy on attendance to pay back $6 million or the cost.

By contract the current $530 million Adelaide Oval redevelopment is being wholly funded by South Australian taxpayers.