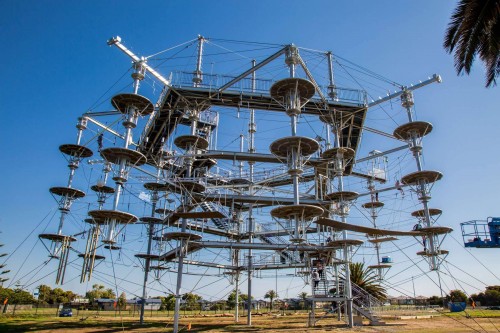 The MegaAdventure Aerial Park at Adelaide Shores has been recognised at the Excellence in Structural Engineering Awards.

The recently presented Awards, for projects completed in 2015, acknowledged the MegaAdventure Aerial Park’s central Skymate structure as the joint winner in the Special/Unusual Projects category.

Opened in November last year, the attraction consists of 54 ‘sky pod’ activity stations over four levels, which form the framework for over one hundred different aerial activities.

In recognising the structural engineering work undertaken by Sydney-based Partridge Partners, the Award judges stated that they “were impressed with the imaginative response to a playful adventure based structure”, adding that “the structure responds well to a challenging architectural brief through use of well thought out engineering concepts coupled with complex analytical tools to develop a robust engineering solution.

“The attention to detail of all of the exposed connections showcase structural engineering to the public.”

The judges concluded that “the overall structural form adds to the adventure and thrill of the experience and will evoke a curiosity from its users, (who will ask) how does it stand up?”

Located at Adelaide’s West Beach the $2 million MegaAdventure Aerial Park was developed over two years as a collaboration between the MegaAdventure Group and Adelaide Shores.

The philosophy behind the development was conceived by MegaAdventure Group founder and Global Chief Executive Alex Blyth who set out to deliver an adventure experience into an urban environment accessible to many people. 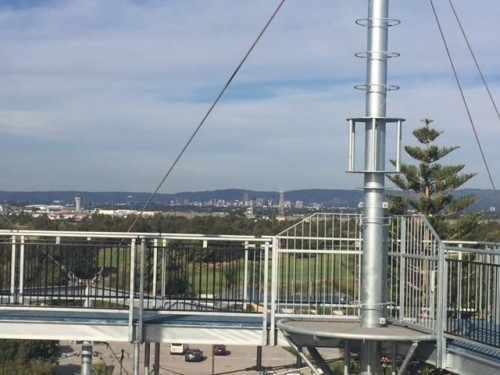 Commenting on the completed project, Blyth explained “it hasn’t been done before – the number of features in this design makes it one of the largest in the world, and the technology used by the designers from TouchCloud Global to build the SkyMate is the first of it’s kind – it’s groundbreaking.”

Two other leisure buildings were also acknowledged at the Excellence in Structural Engineering Awards, as winner and commended runner-up in the Award for Medium Building Projects (for projects with a construction value between $5 million and $25 million.

ARUP’s work on the sports courts in the Netball Central development at Sydney Olympic Parks was the winner while Taylor Thompson Whitting’s work at the Abbotsleigh Multi-Purpose Sports Facility was commended.

Commenting on the Netball Central project, the Award judges “were particularly impressed with the quality an implementation of this solution from an innovation and sustainability perspective.

“The well thought through and researched solution combined acoustics, aesthetics and ‘buildability’ to form a well-rounded structural solution. The submission clearly presented the engineering challenges and provided good insight and detail into the solutions developed.”

In respect of the Abbotsleigh Multi-Purpose Sports Facility, the judges advised that “this project showcased an elegant engineering solution to express an architectural concept.

For more information on the Excellence in Structural Engineering Awards go to www.acse.org.au/announcements/2015awards

For more information on the MegaAdventure Aerial Park go to www.megaadventure.com.au

Click here to contact TouchCloud Global, designers and providers of the Skymate via their Australasian Leisure Management Supplier Directory listing.