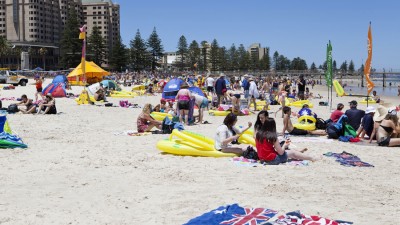 The last five years have seen Perth residents go from being the country’s most regular beach visitors, to the least, according to new data from Roy Morgan Research.

In the summer of 2009/10, a peak of 56% of Perth residents reported having visited a beach, either locally or elsewhere, within the past three months. This put Perth residents well ahead of those in Melbourne, Brisbane and Adelaide (each peaking at 49%), and Sydney (45%) as the country’s most likely to hit the sand. 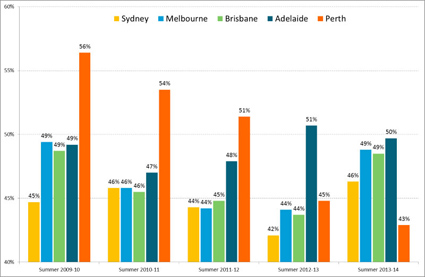 The decline in the rate of beach-going among Perth residents over this time could be naturally attributed to a spate of shark attacks off the Western Australian coast since mid-2010.

Commenting on Australians’ beach going trends, Roy Morgan Research Industry Communications Director Norman Morris explained “with the vast majority of residents living on the coast and summer temperatures often peaking in the mid-40s across many parts of the country, it’s no wonder Australia is a beach-going nation.”

6th March 2014 - QUESTIONS OVER EFFECTIVENESS OF WARNING SIGNS AT BEACHES