Adelaide Oval to get $9 million sound and light equipment upgrade 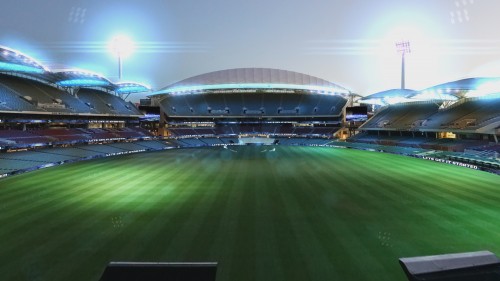 In an all-South Australian partnership with Kojo, Big Screen Video, Sarah Constructions and Mott MacDonald, the Adelaide Oval is to benefit ftom a $9 million to upgrade its light and sound capabilities.

Announced today by the Adelaide Oval Stadium Management Authority (SMA), the upgrade will see the installation of 220 LED lights on the leading edge of the Eastern, Riverbank and Western stands, plus another 248 full-colour LED lights in the stands.

Other features will include state-of-the-art high-definition ribbon boards that will encircle the ground and upper levels of the stadium providing crisp clear imagery and the ability maximise fan day experiences as well as new audio/visual production equipment that will merge all elements together to fully synchronise all screens, music and light shows during events.

Announcing the project, Adelaide Oval SMA Chairman John Olsen stated “this will enable us to give crowds at Adelaide Oval the kind of light and sound spectacular that you see at Juventus Stadium (Turins, Italy) or Stamford Bridge (London, England).

“We benchmark ourselves against the leading stadia around the world and this upgrade will ensure we remain on the pace of innovation demanded by international event promoters.’’

The upgrade is being funded by the Adelaide Oval SMA through a $9 million loan with the Commonwealth Bank to be paid back over an eight-year period.

Olsen added “this announcement represents a significant borrowing by the SMA, but one we believe is integral to our responsibilities as stadium manager and underpins our ability to continue to attract the big events that have made Adelaide Oval South Australia’s premier event venue.”

Daniels explained “we have worked very closely with our major partners to develop an upgrade that will enable cricket, football and other event promoters to continue to enhance the fan experience at Adelaide Oval - an experience that is already recognised as arguably the best in Australia.

“This is the biggest upgrade since the opening of the redeveloped Adelaide Oval and, when combined with initiatives such as the Commonwealth Bank RoofClimb, our LIVE on 5 Fringe venue and concerts such as Adele, it demonstrates our commitment to keeping Adelaide Oval at the forefront of global stadia.”

The 220 LED ‘leading edge’ sports lights will augment the ‘long throw’ incandescent lighting provided by the Oval’s four light towers, which remain vital for game days. The feature lighting through the stadium roofline will deliver a step-change in the Oval’s ability to reflect the colours of the nation or teams on the field through the stadium’s architecture.

The high definition LED ribbon boards will – unlike the current versions in use – run 360-degrees around the stadium at ground level and on levels three and four of the Riverbank and Eastern stands. The high definition panels will enable a vastly enhanced experience for advertisers and fans alike.

The SMA is a joint venture company between SACA and SANFL which bears all the risk on annual operations and repayment of loans.

Work is expected to commence within a matter of weeks with the aim of completion in time for the Day/Night Ashes Test match in December.

Image: An artist's impression of Adelaide Oval with the lights on after the $9 million upgrade.