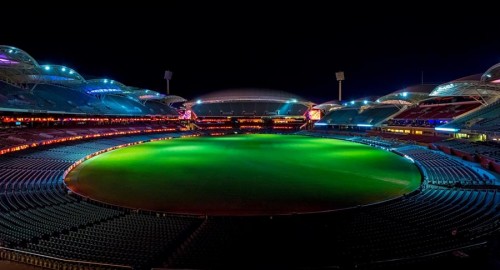 The Adelaide Oval has unveiled its sound and lighting upgrade in time for next month’s day-night Ashes Test match debut.

Described as a “game changer” by the Adelaide Oval Stadium Management Authority (AOSMA), the $9 million technical upgrade aims to enhance and improve the fan experience.

The upgrade project, first announced in March, was funded by the Commonwealth Bank and the Clean Energy Finance Corporation (CEFC), with the loan to be paid back over an eight-year period.

The project is the largest and most expensive upgrade to the Oval since its redevelopment.

It includes a total of 220 LED sports lights that replaces the existing incandescent sports lighting, in addition to 314 LED full colour architectural lights.

The new LED screens provide one integrated canvas, allowing for modern and engaging content, such as activations, pre-game entertainment and moments of exclusivity.

Project consultants Mott MacDonald estimates the updates are projected to use around 35% less energy than the lighting they are replacing.

Commenting on the upgrade, AOSMA Chief Executive, Andrew Daniels stated “as promised the SMA has delivered this substantial technical upgrade in time for the upcoming Ashes Test match, which presents a fantastic opportunity to showcase our new sound and lighting capabilities to a global audience.

“Adelaide Oval is recognised as one of the world’s leading stadia and the SMA is committed to solidifying our reputation as a global innovator through ongoing investment in our facilities.

“We are constantly benchmarking ourselves against the best to ensure Adelaide Oval continues to meet the demands of international event promoters and the millions of patrons that enjoy our venue each year.”