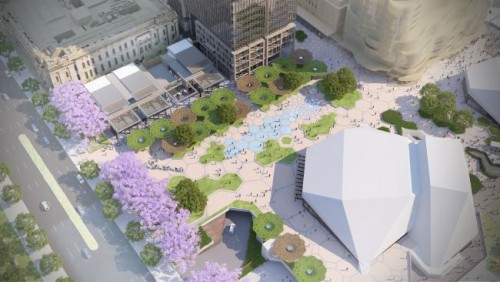 The South Australian Government has approved plans for the redevelopment of Adelaide’s Festival Plaza, triggering a $1 billion transformation of riverbank site.

A formal announcement and contract signing is expected this week with the builders, which in late 2012 won exclusive rights to develop the Festival Centre carpark and plaza.

The development contract is expected to be tabled in the South Australian Parliament, resulting from complex legal arrangements involving the redevelopment of the 5000 metre² parcel of publically owned land.

The long-awaited development involves the Station Road office tower, opposite Adelaide Casino and behind Old Parliament House, and a two-storey complex north of Parliament House including cafes, restaurants and luxury shops. 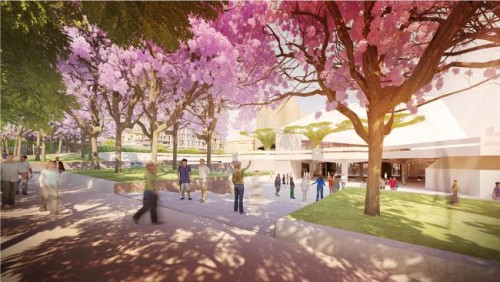 The tired Hajek Plaza, now a concreted open space dotted with multicoloured statues, will be overhauled and marketed as a thriving day-night city destination featuring concerts, exhibitions and pop-up food and drink stands.

Walker Corporation’s website says the project will start later this year and is expected to be completed in 2019.

The dilapidated underground carpark will be the starting point for the redevelopment. A $90 million Festival Centre upgrade involves closing over the plaza to create new entries and foyers.

A separate deal over the 1,560-space carpark between Walker Corp and the Adelaide Casino, which is planning a $300 million expansion, is understood to be close to being finalised.

The area on the bank of the River Torrens faces the Adelaide Oval and is linked to the venue via a footbridge.

The footbridge is used by up to 30,000 people during events at the venue.

Images: Artists impressions of the new area around the Adelaide Festival Centre.