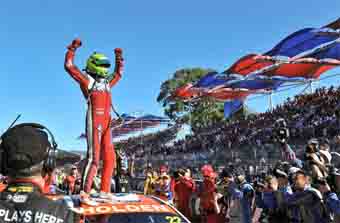 The street circuit event has attracted combined crowds of 3.8 million since it was first held in 1999, more than 195,000 of those people travelling from interstate or overseas.

It has also generated an estimated $420 million of flow-on economic benefits for SA.

The inductees join the South Australian Tourism Hall of Fame having won their category three years in a row.

A further 71 entrants who achieved a high standard in their category were recognised with a gold, silver or bronze medal.

Calypso Star Charter’s Ron Forster was also honoured for his involvement in tourism, receiving the award for an Outstanding Contribution by an Individual. Ron is a successful entrepreneur who has spent the last three decades creating tourism ventures that have been instrumental in promoting the Eyre Peninsula, and in particular Port Lincoln.

University of SA student, Joanna Chudy was chosen as SA Tourism Student of the Year, and will travel to Christchurch as part of the SKAL International Adelaide Student Exchange Program.

Tilbrook stated “South Australia is home to some of the world’s best tourism experiences and it is important to celebrate excellence in an industry that is so significant to the South Australian economy.

“As the State’s peak tourism body, the South Australian Tourism Industry Council continually strives to raise the standards of the industry, present its members as high quality to build consumer confidence and increase participation in the world-class experiences on offer.

“The South Australian Tourism Awards are the pinnacle of excellence within the tourism industry, rewarding innovation and fostering better business practices by setting benchmarks for all tourism operators to aspire to.”

“The Awards’ standards are exceptionally high and visitors can book one of these award-winning experiences with confidence when planning their next holiday.”

The awards are judged in accordance with a strict set of rules and criteria, and winners will represent the State at the Qantas Australian Tourism Awards when Adelaide hosts the prestigious national event in April 2015.

For more information go to www.satic.com.au/index.php/awards