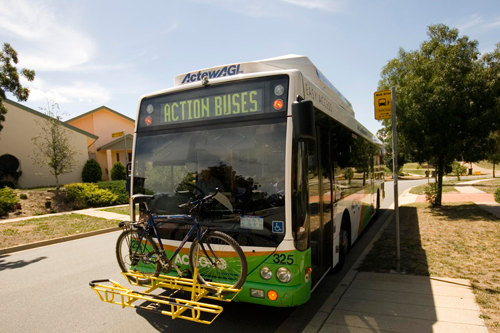 ACT Minister for Territory and Municipal Services and Transport Reform, Shane Rattenbury, has announced a number of policy changes to ACTION buses that will encourage more active transport across Canberra.

Revealed during a presentation to a forum on Canberra’s transport future, Minister Rattenbury, stated “I’m pleased to announce an end to a policy that has long troubled Canberra’s bike riding public.

“Over the coming months, ACTION buses will commence fitting bike racks to all of its articulated and steer-tag buses, meaning 98% of buses will be soon be able to carry bikes, up from the current 84% percent figure.

“This is great news for the travelling public, who will soon be able to ride part of their journey on a bicycle and part of it on a bus and be virtually guaranteed that the bus will be fitted with a rack. As the articulated and steer-tag buses are frequently used for the key inter-town routes, this will be especially beneficial to commuters.

“We have undertaken a comprehensive safety and risk assessment resulting in a change to the previous policy that some ACTION buses were too long to be safely fitted with the racks. “The only buses that will not be able to carry bikes are the short ‘Dennis Dart’ buses – of which there are only nine active in the ACTION fleet – as they are structurally unable to carry the racks.

“It is important that we do everything we can to facilitate sustainable travel in this city. Easy interchanging between modes – whether it is bike to bus, or bus to light rail – is a key aspect of this.

During the forum, Minister Rattenbury also presented his vision for the transport future of Canberra, saying that with the right efforts and commitment it could excel as a sustainable, vibrant and active city.

He added “our young city sits at a crossroads, with rapid growth expected in the next decades. In one direction lies car centric development, creating a city of ever-growing roads, congestion and urban sprawl. In the other direction lies a city with sustainable transport at its heart. This path prioritises people and our environment, with a long-term vision for a clean, convenient and equitable city.

“The key is taking the bold steps now: creating a quality public transport system for the future; prioritising active transport modes like walking and cycling; planning urban environments that value people and activity.”