ACT Government looks to encourage people to run, cycle and skate to work 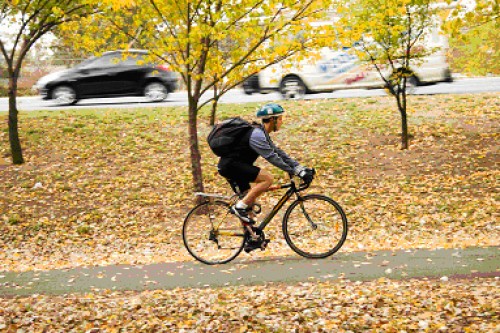 To encourage more people to exercise on their way to or from work or at lunchtime, the ACT Government is proposing planning changes for secure bike parking, change rooms and more ‘end-of-trip’ facilities in new buildings.

The proposed changes are in draft variation 357 to the Territory Plan which has been released for public consultation.

Explaining the move, Ben Ponton, Director-General of the ACT's Environment, Planning and Sustainable Development Directorate, explained "the (ACT) Government is keen to find out whether the community supports the changes which require end-of-trip facilities in new buildings or buildings undergoing major extensions or alterations.

“End-of-trip facilities include secure bike parking and change rooms so people riding a bike, running, skating or otherwise getting up a sweat on their way to or from work - or who exercise at lunchtime - have somewhere to change, shower, and store and dry their gear.

“This proposal puts practical measures in place to support the government’s Active Living and Active Travel programs to encourage more people to include exercise in their daily activities, and to reduce barriers that might prevent them being more active.

"Of course, people have better health when being active as part of their daily routine. This is about seeing riding and walking as a means of transport - not just as a form of exercise. The environment also wins when there are fewer cars on the road contributing to congestion and pollution.

“The Government is asking people to comment on changes to the Territory Plan, in the form of a proposed End-of-Trip Facilities General Code.

“The Code would replace the existing bicycle parking code and would apply to new buildings and when major alterations or extensions or changes of use that require approval by the planning and land authority are made to existing buildings.

“As an incentive to building owners and employers, end-of-trip facilities will no longer be counted as part of gross floor area calculations of new and current buildings that are constructed or refurbished.”

The consultation is open until 13th June 2017 and can be viewed at www.yoursay.act.gov.au